When Adobe changed its Creative Suite software to a subscription-based Creative Cloud a few years ago, there was much gnashing of teeth and consternation amongst the photo community. We were used to paying a one-time payment for software to use for many years, without being forced to upgrade. So why is it that photo apps get a pass for doing the same thing when it comes to subscription models?

I revisited some photo apps that used to be old standbys, and was surprised that one of them (The Baby Pics App) had switched from a pay-once to a subscription model. I also checked out Prisma to find that, sadly, it was still a subscription-only model if you want to get photos of any usable resolution. And then of course there’s the much bigger VSCO, which charges a subscription to access hundreds of extra filters, video editing, and advanced editing controls.

Each on its own doesn’t seem like much. Most subscription-based apps run between $14-70 per year, versus Adobe’s exorbitant $53 a month. That said, subscribing to just these three would then end up being close to an extra $100 per year, not to mention the many other apps out there that aren’t in this article. It’s like death by a thousand cuts. There are plenty of things photographers already have to shell out subscriptions for. Keeping track of every app that’s pulling money from the credit card each month is a terrifying prospect.

I’ve purchased a month or two subscription in the past when I’ve had the reason to, such as needing higher resolution out of Prisma for a printed project, but my natural inclination, and I imagine it’s a reaction many normal folks have when they see a subscription option, is to balk at the recurring cost. I’m much more likely to shell out money if I know I only have to pay for it once instead of watching it drain my credit card each month, even if the cost is a bit higher than a month of subscription. Think of it as buying the Blu-ray disc instead of going with Netflix. When Netflix pulled Battlestar Galactica from its catalog, no amount of subscription would bring it back, but my DVDs are still viewable anytime I want. 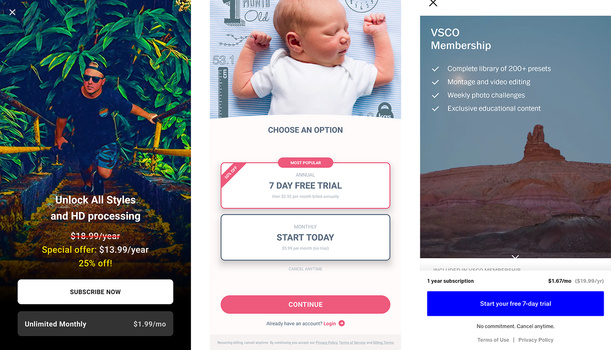 This is a big reason I have a lot of respect for Serif’s business model with its Affinity line of creative tools. They are high quality tools at a fair, one-shot price and that alone helps me more enthusiastically recommend them to students and creatives I encounter who don’t necessarily need to buy into the hegemony of an Adobe subscription.

The other part of the subscription model is the philosophy behind the decision. For Adobe, you are getting full-fledged software for the price you are paying per month. In the case of Prisma, it’s blatant crippling that you have to remove with the subscription. The software can do everything you want except output at higher resolution (and maybe add a few filters). Paying for the privilege feels like an insult. Maybe sell some ads alongside it or offer the option of a one-time fee to avoid the annoying subscription? At least VSCO throws video editing and some advanced photo editing tools into the mix, but again that’s nothing that can’t be accomplished by other (free) software on your phone, such as iMovie or Snapseed. Is the feel-good “support the community” aspect of VSCO worth the subscription when Instagram offers much of the same experience for free?

So if you’re developing a killer photo app, here’s my plea: Please don’t make me buy a subscription. I’ll gladly pay a little more just to avoid that.