One of the easiest ways to enhance the story and transform a dull scene is by using lighting.  In this video, learn to incorporate motivated light into your scenes to bring your story to life.

When breaking down the scenes from your favorite Hollywood movies, when you look at the lighting they use, the basis behind lighting any shot comes from the practical lights that are in the room. This could be a lamp, a window, or a TV screen, or anything that produces light that is seen in the frame. If you’ve ever tried to expose for a practical light in a scene, you’ll run into the main issue. The light coming from the practical is overexposed and your subject is under-exposed. To resolve this issue, you’ll want to use motivated light.

In this insightful video from Aputure’s weekly video series, 4 Minute Film School, Matt Asteron walks us through a dull and boring scene, and shows how by using motivated lighting, he is able to transform it into a cinematic image that tells a story and conveys emotion. 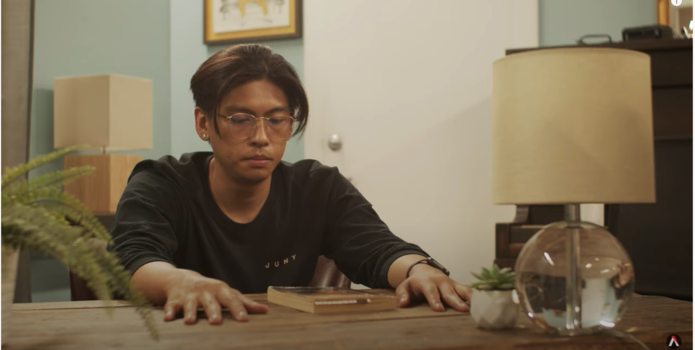 In this specific example, Asteron shows how to match the light quality and color coming from a lamp shade. However the same principles apply to any practical light you’re trying to motivate. The main things to keep in mind when talking about motivated light, is to first assess the quality of light that is being produced from the practicals, which is typically classified as hard or soft. Once that’s dialed in, you’ll need to match the color being emitted from the practical to sell the effect.

Motivated lighting is something I do before assembling any scene. In the example below, I wanted the desk lamp to be the main source of light in the shot. However, if the lamp was turned on, it produced a minimal amount of light and the spread of it wasn’t controlled. That’s where this technique comes into play. First, I placed the lamp in the scene and established where I wanted the light to fall. Then, I took an Aputure fresnel mount and put that on an Aputure 300d. This helped match the spread of light that the lamp produced, but also gave me the ability to dial in the exact amount of power I needed to pull off the shot.

Have you ever used motivated light in your scene? Share your images in the comments below!

The Least Expensive Way to Shoot Underwater in a Pool

Apollo 14: A View from Antares