There’s Something Magical About Leica: M10-R vs Fuji X-T3 and Sony a7R III

Photo Of The Day By David Shield

As a company, Leica tends not to push the boat out too far, especially with its M series of cameras. Feature sets tend to be limited, and this seems to work extremely well for its specific market.

For example, the biggest changes between the M10 and the M10-P were the additions of a touchscreen and a redesigned shutter. Updates between each new camera tend to more about refining what has already been produced, as opposed to trying to update every feature on the spec sheet.

The M10-R might be somewhat of an exception to the rule, because the new high-resolution sensor in this camera puts it notably ahead of many other M series cameras. The only other update that I could find was that this new camera is capable of shooting long exposures up to 960 seconds without needing aperture priority mode. Other than that, this is a very familiar Leica camera with very typical features, which I have already covered in a previous article.

On this occasion, I decided to see how images from a Leica camera compare against some more typical mirrorless cameras like the Sony a7R III and the Fujifilm X-T3. In the video linked above, we perform a relatively unfair and unscientific comparison. It’s mostly done for fun, although there are some aspects of the Leica that really stand out. 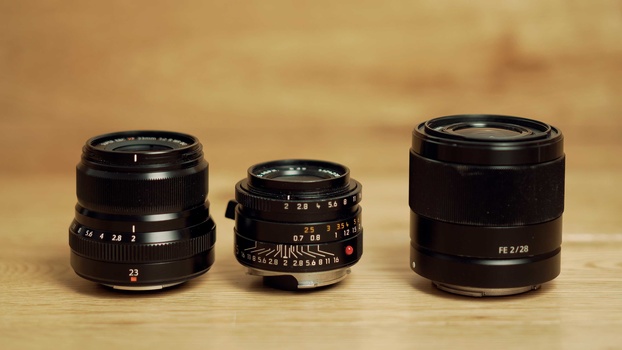 The lens is tiny and relatively lightweight, although it does feel rather dense in the hand. I had no idea such a small lens could cost more than $3,500, but then again, we are talking about Leica here, so I shouldn’t have been surprised.

In my experience with Leica, the lenses they produce tend not to be the sharpest I’ve ever used. In fact, a good number of them tend not to be sharper than some of the more “standard” lenses I use from various manufacturers.

For example, the 35mm lens that we shot with was pretty soft wide open. Even compared to the Fuji 23mm, which isn’t known for its sharpness, the Leica lens was noticeably softer.

In the video linked above, a number of comments were certain the Leica lens couldn’t have been softer than the Fuji. Many thought there may have been something wrong with the lens I had received. I forwarded these concerns to Leica, who performed a quality check on the lens I shot with, and they confirmed the lens focus was “spot on”.

Based on that, we can safely assume that the results are typical for this particular lens. 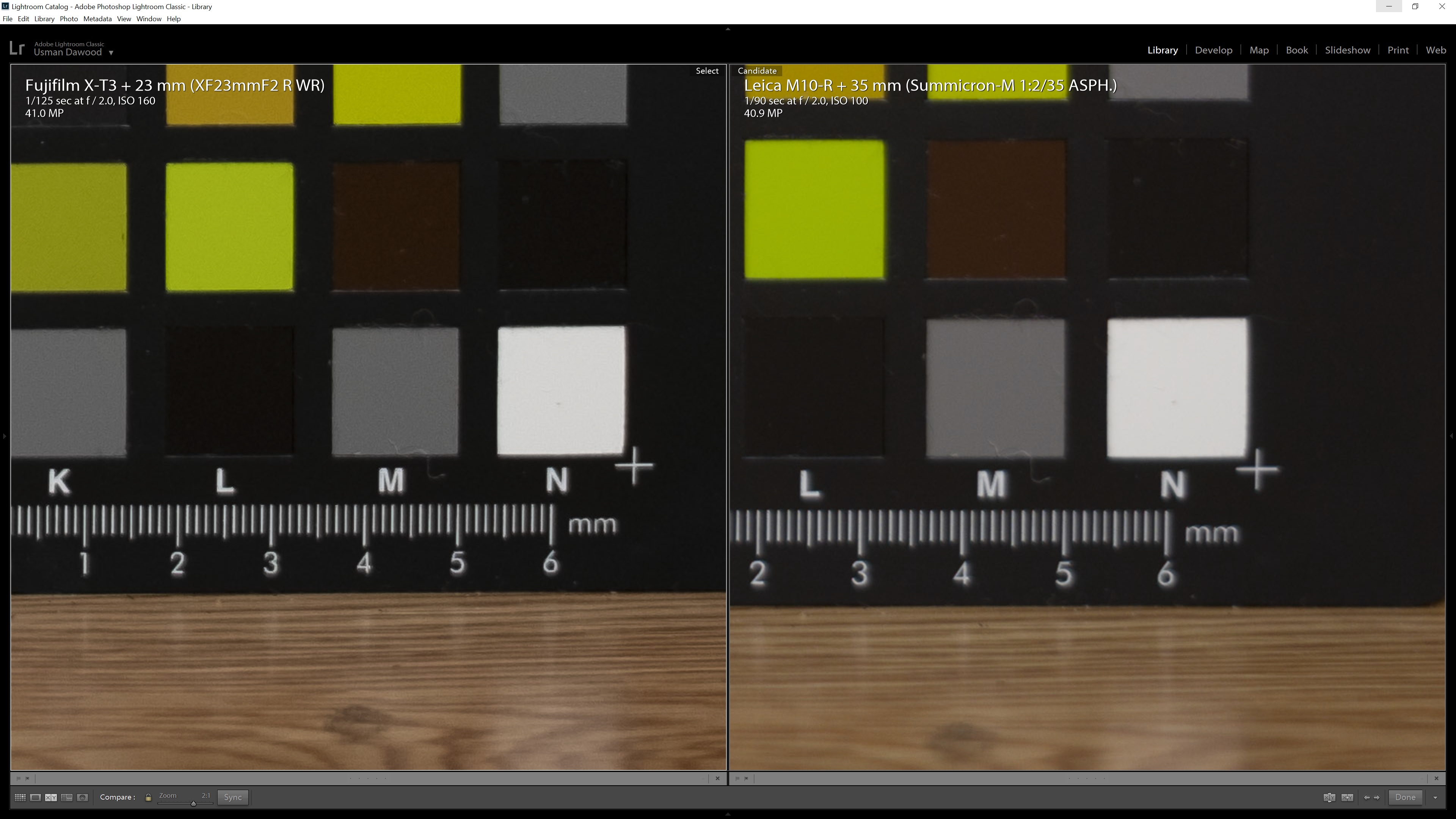 Fujifilm image upscaled in Photoshop to match the resolution

The difference isn’t huge between the two; however, it’s noticeable, and the Fuji lens is sharper. For people who care about detail above everything, this may be a point to consider if you’re looking at purchasing the Leica. Having said that, this didn’t bother me at all.

These conventional methods we use to test and compare lenses don’t really work when it comes to Leica M series cameras. This is because M series cameras aren’t about producing the sharpest and most detailed results. What they do instead is produce beautiful results.

On every previous occasion I shot with a Leica M series camera, there was just something wonderful about the images it was producing; I just couldn’t put my finger on it. It definitely wasn’t the sharpness and detail, but whenever I showed images from the camera to other colleagues and friends, they too responded positively to them. After having done this comparison, I think I can specifically describe what it is.

As you may imagine, it’s difficult to compose an image exactly the same when photographing a person. For this reason, we’re going to try and focus on what I think is the biggest and most objective difference between all three images, which is color. The hair and skin tones are a perfect way to compare all three cameras, and Leica not only does a much better job in terms of accuracy, it actually looks more pleasing.

Both the Fuji and Sony have managed to get the hair color wrong quite drastically. Anetes’ hair looks ginger in the pictures from those two cameras.

For all three cameras, the best and most accurate native profiles were used, and white balance was determined by the camera itself. I tried a number of different profiles for Fuji and Sony, and both cameras struggled with getting hair color and skin tones relatively correct.

Leica seems to do an incredible job with colors, and every image it produces looks vibrant and rich while also being more accurate. The lens also adds a great deal to the image too with its almost dreamlike look it. The way it renders the background is simply beautiful and both the Sony and Fuji lenses don’t have anywhere near as much character.

As sharp as the Fuji and Sony lenses are, for most people, when they see the images, the character in the image stands out far more than a little extra detail, and that, in some sense, is the magic of Leica digital cameras.

One of the common arguments against color science is white balance. Many people say that if you correct the white balance, then any perceived differences will be nullified.

This isn’t true at all, and to demonstrate why it isn’t true, I took a number of images in a controlled environment. All the cameras were shot on a tripod with controlled lighting. The images were then white balanced based on the ColorChecker Digital SG using the same color patch.

In the video, I zoom in on the higher-resolution files to show the differences more effectively, but even looking at the images here, you can see how they differ.

Both the Sony and Fuji have a magenta cast on the wooden background, and the Leica is more accurate. The other difference you may notice is that colors from the Leica have a certain richness to them when compared to the Sony and Fuji. Both of these points can’t be fixed simply by changing white balance, so the argument doesn’t really hold merit.

I’ve shot with a number of Leica cameras now, and the M series really does have something quite wonderful about them. The way you shoot with the camera is an experience that I haven’t found with any other system. The lenses produce beautiful results that aren’t about sharpness or detail; instead, they’re about the feel. This isn’t simply a matter of overspending photographers trying to justify their purchase, because it’s visible in side-by-side comparisons.

Despite this, Leica cameras come at a hefty price, and for many people, it’s simply not worth it. If you’re planning on shooting professionally, then an M series is probably the wrong camera to pick.

These types of cameras sit in a completely different category, and it’s a little odd trying to compare luxury items to workhorse equipment. On the other hand, if you have the money to spare, the M10-R is an incredibly enjoyable camera that produces wonderful photos.

Check out the full video if you’d like to see more of the comparison.