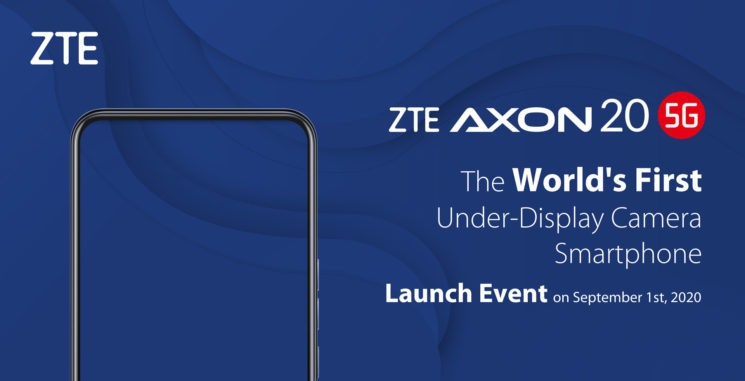 While there have been a few prototypes and concept phones from the likes of Oppo, Xiaomi and Samsung, it seems none of them will win the race to release the first smartphone with an under-glass selfie camera. No, that honour will be taken by Chinese smartphone manufacturer, ZTE with their new ZTE Axon 20 5G.

No specific details have been mentioned about the specs of the under-glass selfie camera contained within the phone, although XDA-Developers says it’ll be 32-megapixel. ZTE says that it will be “the world’s first mass-produced 5G smartphone featuring under-display camera” and will launch on September 1st.

While ZTE is a relatively unknown name in smartphones around much of the world, they’ve actually been around since 1985 and are one of the top five largest smartphone manufacturers in their home market. They have suffered its share of controversy over the last few years, though, so it’s likely that the phone won’t come to the USA any time soon.

ZTE was the first to launch a commercial 5G Smartphone last year, with the ZTE Axon 10 Pro 5G in China, Nordic region and the Middle East. ZTE says that “by launching the world’s first 5G smartphone with under-display camera, ZTE will further promote the developments of display technologies in the smartphone industry”.

The ZTE Axon 20 5G is the next stage in their evolution towards “a true full display smartphone”. Although none of the other specs have been confirmed officially, although XDA-Developers reports that there are some specs that can be confirmed from a recent TENAA certification.

It says that the front camera will have a resolution of 32-megapixels – a significant amount for a selfie camera. On the rear, there will be 64-megapixel, 8-megapixel and a pair of 2-megapixel cameras. Not surprisingly, there’s no headphone jack.

The ZTE Axon 20 5G will launch in China on September 1st, 2020. There’s no telling when or if it it will make it to other parts of the world.