The Best Instant Camera and My Newest Photography Obsession: Shooting Instax Film on My Mamiya RB67

A Landscape Photographer’s Editing Workflow in Lightroom and Photoshop

Who would have thought to pair Instax film with a vintage medium format camera? I couldn’t stop myself from shooting it if I tried.

A few months ago, I ordered an adapter for shooting Fujifilm’s Instax square film on my Mamiya RB67. I was a bit nervous having purchased it on eBay from an international vendor. It took some time to arrive, but when it got here, I was set with batteries and film in hand. I bought one pack of the standard, white-bordered Instax film (10 sheets), thinking that would be enough. I went through nearly all 10 shots the first day, and I was even trying to hold back. It was just so addictive that I struggled to not shoot more. On that first day, I went to B&H and bought several packs of the standard, white-bordered film and a few packs of the film with black borders to see if I liked the difference in aesthetics.

Since the time that I received the adapter, I haven’t used my Mamiya RB67 for anything else. If you’re familiar with my previous film camera reviews, the Mamiya RB67 is one of my favorite cameras. A few months ago, I ended up picking up the RB’s older sibling, the Mamiya RZ67, and since then, my RB wasn’t getting as much love. That changed completely, however, after having the ability to shoot Instax film with the RB. 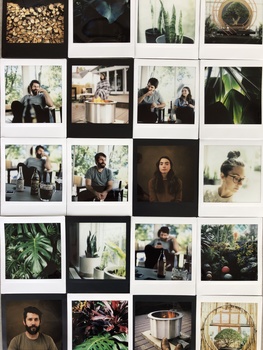 In a pros and cons list for Instax film, the biggest pro would have to be the fact that it is instant film. It takes only a few minutes to get a good sense of what the photo is going to look like, and with only 15 or so minutes, you can see the final product. Compared with Polaroid film, the photo itself is a good deal smaller, which is a bit of a bummer, but in all honesty, I prefer the colors of Instax much more than Polaroid. And there is, of course, the fact that Instax film is considerably less expensive than Polaroid film. While I cannot speak to the quality of Fuji Instax film using a Fuji brand square Instax camera, I can say that even with my Mamiya glass, it’s far from the sharpest film I’ve ever shot. With that said, I recognize that it was originally made for using the inexpensive cameras from Fuji, but still, it would be nice to have just a touch higher resolution. Nevertheless, the photographs have a very nostalgic vibe to them, which isn’t really affected by the lower resolution.

With all of this said, I still have some complaints about the Instax film that isn’t made up for by its nostalgic feel. Most notably, the dynamic range is nearly non-existent. If I had to guess, I would say that it has 5 stops of dynamic range at most, probably more like 3-4. In addition, while it is rated at 800 ASA, I am almost certain that it is only accurate on occasion. By that, I mean that I have loaded the occasional pack of film that I’m certain is considerably slower than 800; most of the shots come out far too dark unless I rate it for 200 ASA. The majority of packs of film, however, seem to turn out well when metered at 800 ASA. Finally, it really does not handle dark scenes well or studio portraiture well.

What about you? Do you have any experience shooting instant film with an old medium format camera?