Storm chasing on the Great Lakes can be a hit-or-miss enterprise. In particular, Lake Michigan presents a formidable challenge because the weather here typically travels west to east across the lake and often changes rapidly once over the water.

Depending on conditions like wind direction and lake water temperature, the lake can dramatically affect a storm as it crosses over. As the fifth-largest lake in the world, with a surface area of 22,404 square miles (58,030 square kilometers), it’s basically an inland freshwater sea. It provides not only great beaches, but it has some magnificent sunsets as well.

On August 10th, I observed a storm on the radar that looked like it had some potential to be photogenic. Even though the storm was several hundred miles away, I started to make plans. I chose to drive 70 miles to South Haven, Michigan, where I estimated the storm would make landfall and provide a suitable location for photos. 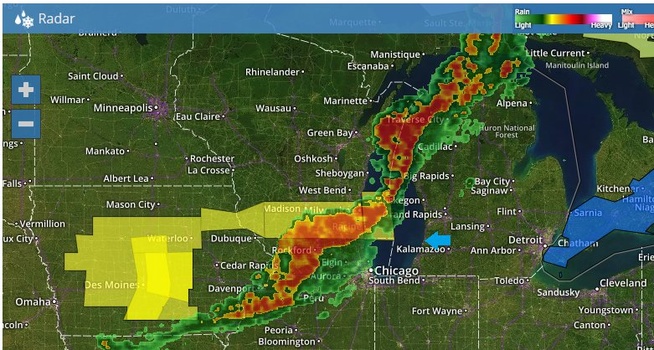 Before leaving, I heard that the derecho had the potential to cause a meteotsunami, which is much more ominous-sounding than it is. Basically, a meteotsunami is a condition that pushes a large amount of water into shore, like a storm surge during a hurricane. For an area that doesn’t have tides, it usually catches many people off guard.

Upon arrival in South Haven, the weather service reported that 80+ miles on the other side of the lake, wind speeds were recorded at over 100 mph, with a couple of tornados. Cornfields were flattened and silos were blown over. “This could be good,” I thought.

I hoped to get photos of some wicked clouds and maybe some lightning. I haven’t had much luck with lightning in the past; it seems like every time I try, the lightning isn’t very good. I had also hoped to get a beach shot, but because of the high water in the Great Lakes right now, there were sandbags across the area I wanted to shoot.

I ran quite a few 30-second exposures with a 10-stop ND filter, but all of the lightning seemed to be out of frame, either to my left or to my right. I managed to capture the lead image for this article just before the rain started, so I was happy with this part of the chase, but I wasn’t done yet. 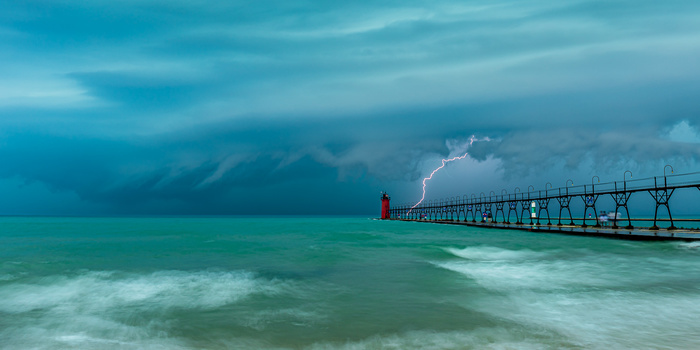 When a storm goes through just before sunset, we often have some great color and clouds after the storm. I could see on the radar that the area behind the storm looked relatively clear, so I put the second part of my plan into action.

While driving back north 50 miles to Grand Haven to catch the sunset, I called a photographer friend and told him I could see the sky was opening up behind the storm. He said: “No, it’s going to be cloudy out for at least two hours,” and then he went home. He could not have been more wrong.

I knew it was going to clear up and had the potential for a beautiful sunset. Arriving at Grand Haven about 30 minutes before sunset and while it was still raining, I ran out to capture what sun I could see, just in case it closed up. 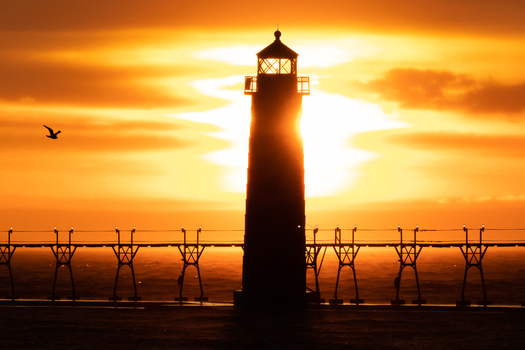 I then turned around to see a giant double rainbow. This is where I knew I made a big mistake, because I was standing there with a 100-400mm lens, and the wide-angle lens was several hundred yards back at the Jeep. I took a cell phone pano and made a run for it, but I didn’t make it back to the Jeep before the rainbow faded. 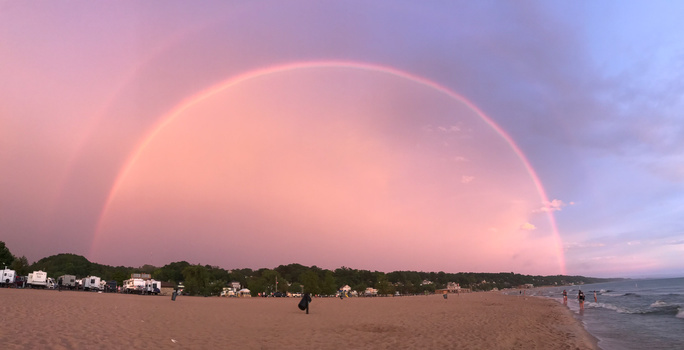 I was out of breath from running in the sand, but I had to get back down to the beach. I grabbed my tripod and ran back down to the beach, which was looking extraordinarily good at this point. I was in awe of the color and the texture of the clouds, and after I got a few shots in, I spent a good portion of time just enjoying it. 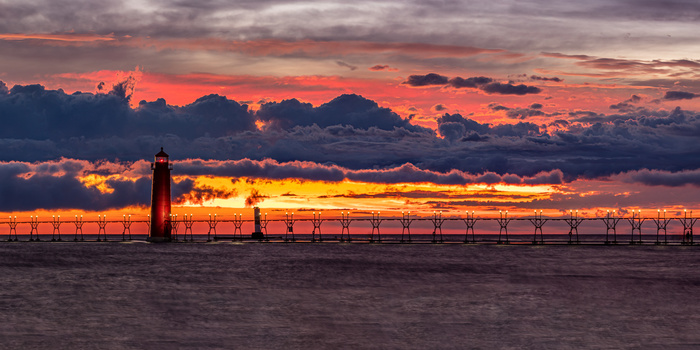 Overall, it was an exciting day. I managed to get a few keepers and learned a few things, like always take a wide lens, an extra battery, and a lens cloth, even if you don’t think you’re going very far from your vehicle. Oh, and always keep an eye out behind you for that rainbow. It really was a fun day chasing the storm with my wife.

Learning your local weather patterns is crucial to capturing great landscape photos. Get a good weather app and keep a mental note of how storms behave under certain conditions. The weather forecasters aren’t always correct, and small local variations can sometimes be overlooked by a forecast for a larger area.