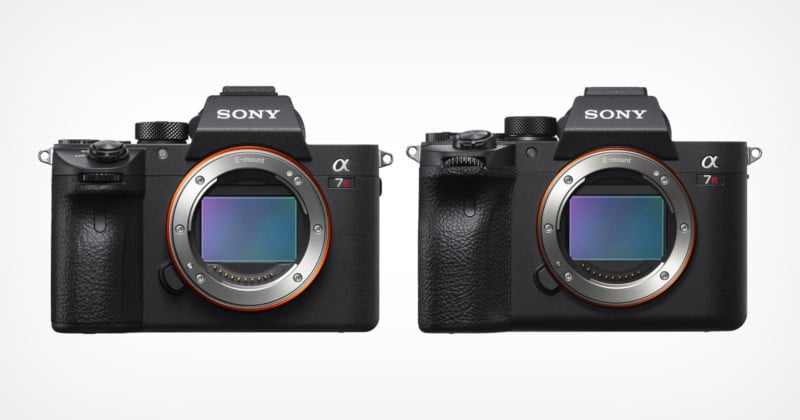 Sony has quietly launched new versions of its a7R III and a7R IV cameras that feature some small cosmetic changes along with noticeable improvements to specific hardware. The new cameras have a new “a” added to the official product name that differentiates them from the originals.

As originally noticed by Nokishita and reported by Sony Alpha Rumors, Sony has quietly launched two new versions of its high-resolution full-frame cameras. Sony has published the video below that, for the most part, covers all the features that are normally associated with the Alpha 7R III but with minor changes to the presentation to reflect new additions to go along with the new product name (ILCE-7RM3A). These changes are also reflected on a new version of the Alpha 7R IV (ILCE-7RM4A), though Sony did not publicize the changes to that camera to the same degree at the time of publication.

The most notable change is a dramatic upgrade to the rear LCD resolution, which jumps from 1,440,000 dots to 2,359,296 dots. Two other changes come to both cameras as well: The Sony logo under the LCD monitor has been removed, and the USB port has been upgraded to USB 3.2 “SuperSpeed USB 5Gbps.”

Below are two images taken from Sony’s official website that show how the logo has been removed from the rear LCD of the Alpha 7R III:

At the time of publication, no major camera distributor had yet listed the new cameras for sale or recognize the new product name, instead defaulting to the original versions of both cameras. It is not clear when the new versions of the cameras will become available to purchase and if they will outright replace the models currently on store shelves or result in a price drop for the now lower-specification camera bodies.

Likewise, Sony’s official website does not currently list any online sellers that offer the upgraded versions of the devices. What may become confusing for potential customers is that while the official product name has changed, the display name has not. Both the new versions of the Alpha 7R III and Alpha 7R IV appear with those names on Sony’s website, and both the original pages for the ILCE-7RM3 and ILCE-7RM4 are active.

Sony representatives were reached for comment but did not respond ahead of publication.

No pricing for the new ILCE-74M4A or the ILCE-7RM3A are yet provided, and while prices are still available for the original models, Sony has not given any indication of potential changes in price for those now lesser versions at the time of publication.