I took a look at Topaz DeNoise AI earlier this year and found it effective at removing noise without killing the details in your images. My only complaint was that it was not a speed demon. On some large images, I had to wait almost a minute before the image was cleaned up. Is that better in the latest version?

Now Topaz Labs has a newer version of their application/plug in. The current version is 2.3.1. Here’s what is new:

I think the most significant addition is the multi-screen view. Once it’s showing, you’ll get a really good idea what your image will look like after Topaz does its magic.

You’re not stuck with the AI decisions either. You can adjust the amount of noise removal, increase color noise suppression, and also add some sharpening. In the quad window view, you’ll see your original, untouched version.

There’s the DeNoise AI version (which in my experience is usually the best choice). Then there’s a Clear AI algorithm at work, and finally, a low-light example. Most of the time, DeNoise AI will get the right alogrithm to use, but you’re free to decide that another one would work better.

I tried DeNoise AI on some images where noise reduction is almost always called for: my Milky Way images. Even when I do a combination of 10 or more images, there is still some residual noise. 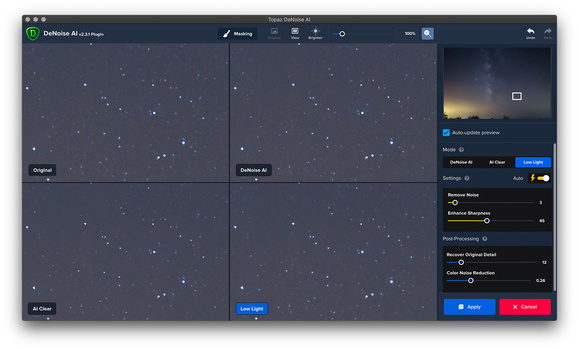 When I applied DeNoise AI, it found the best mode was the low-light noise reduction option, and I agreed. Sometimes, I could leave the settings as Topaz wanted them; sometimes, I added a bit more noise reduction.

I saw no loss of sharpening using the AI settings, and in my experience, that’s remarkable for a noise reduction algorithm. I almost always lose a bit of sharpness when using other methods, including Lightroom noise reduction. I also saw no color shifts, a sometimes visible artifact of noise reduction. Chroma noise was banished as well, and there is a slider so that you can adjust this setting to taste if the AI doesn’t get it all. In my experience, it did fine on its own.

On landscapes taken in low light, the noise reduction was also excellent. You can see how it’s doing in this split screen view. 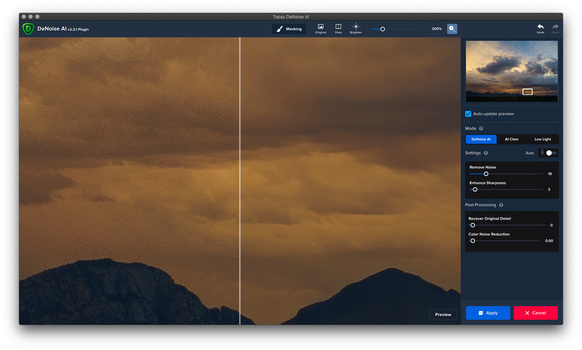 You can see pretty clearly that after processing, the image on the right is very clear compared to the before image on the left. I can’t find any artifacts from the noise reduction.

Here’s another image taken in bright light at Joshua Tree National Park. There’s still noise in the image even at a low ISO. Topaz cleans it up nicely. 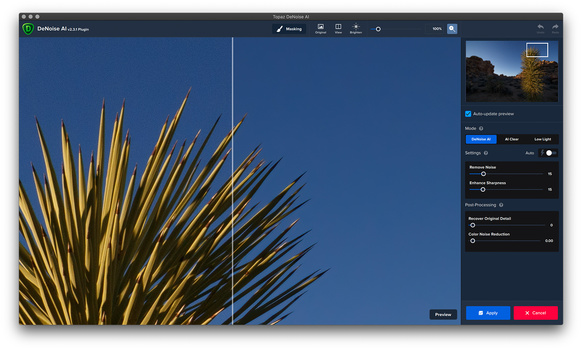 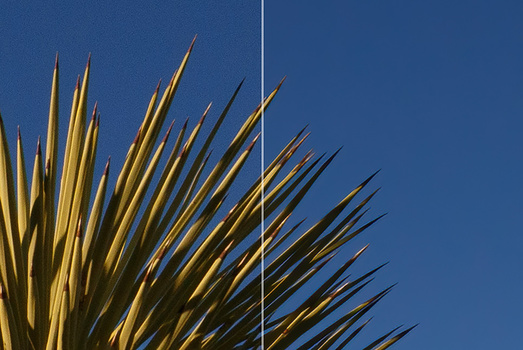 Some other nice features that have been carried forward include the ability to mask out parts of the image where you don’t want noise reduction. I didn’t do any official benchmarks, but running the software seems to be about 30-40% faster. That’s a real plus.

In truth, having DeNoise AI is like getting better equipment. In shooting the Milky Way, I am limited in my exposure time without using a tracker. So, that means short exposures and increased noise, even when I stack and combine images.

DeNoise AI pretty much solves the problem without having my image quality take a hit. Don’t expect it to work a miracle on a really crummy, noisy image. Any AI program has limits, just like there is only so much you can do to any image when editing it. But it will make any image better. Some images will emerge completely noise free.

There are a couple of issues I’d like to mention.

I’ve had some Topaz plugins for quite a long time, and Topaz was great at upgrading them. I’ve had DeNoise AI for a year and just got notice that an upgrade is $50.00. That’s a change in policy from Topaz and not a welcome one. I don’t begrudge anyone for making a buck or two on some really great software, but I can’t say I love what appears to be a different, less generous policy than before.

I’m also still unhappy with the way they upgrade. The upgrades are big files, and if you decide to upgrade, you’ll find out when you launch the app or plugin. It will stop your workflow cold. Everyone who makes software upgrades it, of course, but the Topaz upgrades are big.

They don’t appear to be patches. On my not-so-fast DSL line, upgrades can take an hour. I usually put them off, but I always wonder if there is some fix that might be important to me.

Topaz DeNoise is priced at $79.99, but for the next nine days or so, it’s $59.99. I think for the power offered, it’s a very good deal. Topaz can run as a stand-alone app or as a plugin to Lightroom or Photoshop.

If you do a lot of low-light or night photography or astrophotography, I think Topaz DeNoise AI is a must-have. Even on brightly lit images and lower ISO settings, it makes a difference if your images are headed to a publisher or a gallery.

Nikon is Going to be Fine… Probably