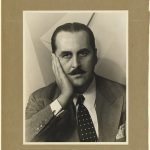 “One very important difference between colour and monochromatic photography is this: in black and white you suggest; in colour you state. Much can be implied by suggestion, but the statement demands certainty… absolute certainty.” —Paul Outerbridge (1896-1958)

Paul Outerbridge was a designer and illustrator in New York before turning to photography in the 1920s. In 1925, having established himself as an innovative advertising photographer and graphic designer, he moved to Paris and worked for the French edition of Vogue magazine. There he met Edward Steichen, with whom he developed a friendly rivalry. Around 1930, having returned to New York, Outerbridge began to experiment with colour photography, in particular the carbro-colour process. He focused primarily on female nudes—striking, colourful images that were ahead of their time. The growing popularity of the dye transfer process led to cheaper colour photographs and Outerbridge, who stuck fast to the carbro process as superior in its richness and permanence, saw his commercial work dry up, leaving him without a regular source of income. In 1943 Outerbridge moved to California, where he photographed only intermittently.