One photographer has had his attempts at capturing the Comet NEOWISE sabotaged, after his view was interrupted by SpaceX’s Starlink satellites, whose lights cut into his shots.

Photographer Daniel Lopez had been hoping to take a telephoto timelapse of the Comet earlier this week, and although able to capture some great images, they were intruded upon by the satellites. Armed with a 200mm lens and the Canon Ra astrophotography mirrorless camera, his goal was to stack a number of 30-second exposures to create one final photo. Lopez says around 20 of his long-exposures were sabotaged by the satellite streaking across the comet trails. Of these, 17 were used to create the image you see here. 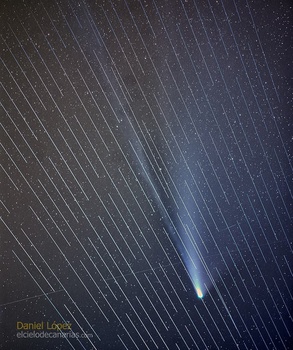 The field isn’t too big — 200mm with a full frame — but it happened to be passing right over the comet.

Incidentally, SpaceX has previously announced plans to reduce quite how bright their satellites are, doing so by angling solar panels and installing sunshades.

Lopez had previously garnered attention for an image he shot of the moon, as it appeared behind people 10 miles away. See more of his work on his website, Facebook, and Twitter.

All images Daniel Lopez and used with permission.

Seven Tips for Shooting Street Photography With Your Smartphone