Phone Cameras Are Stagnant: Is This Good News for Real Cameras?

The Google Pixel line pushed the limits of what a phone’s camera could do, but the Pixel 5 looks like just a refinement, not a leap forward. The rumored specs for the iPhone 12 are similarly boring, particularly for regular photography. Is this setting the stage for real cameras to rise like a phoenix?

Apple, Google, and Samsung have started to run into the hard challenges of physics. For a sensor and lens combo that can realistically fit into a phone, you can only gather a certain amount of light. Sure, Sony’s IMX363 is an impressive bit of semiconductor engineering, cramming 12 megapixels onto a 1/2.55″ sensor. The stacking and backside illumination have further boosted its performance, but it’s telling that this sensor is a couple years old and still being used for devices — nothing better has really come along.

Now, the spin on this sensor reuse is that it’s allowed the software engineers to refine the algorithms that power all the camera’s computational imagery tricks, but I think that’s an implicit acknowledgment of the actual issue, that software improvements have to be relied on over hardware. Don’t get me wrong, the software that powers smart HDR functions and things like Night Sight/Night Mode is incredibly impressive, but as everyone knows, you can’t always save a photo via Photoshop. 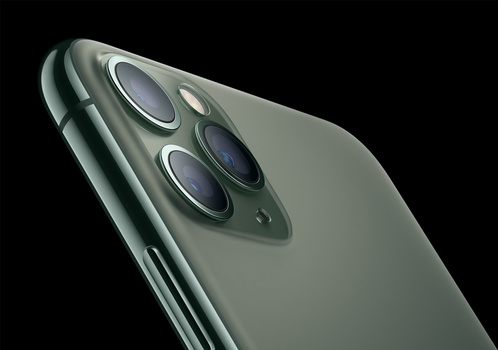 A parallel can be drawn to another area of the semiconductor industry, processors, where clock speeds and IPC gains generation over generation have diminished. In the case of processors, some incredible work by TSMC has breathed life back into the space via AMD’s Ryzen line. Before that point, however, it was thought that better written, more readily parallelized software would be left to pick up the flag of Moore’s law.

This reliance on software to pick up the slack of hardware has been the same trend shaping the last year or two of camera phones. To my mind, the addition of a quality ultra-wide angle lens has been the last significant hardware change in cellphone cameras. The periscope telephoto options are of very limited use and quality, while the 3D/Lidar rumors seem to be AR, not photography focused. For a very unscientific example, find a non-photographer friend with a veteran Instagram presence: those grainy, yellow tinged photos from 2012 are a far cry from what you’d get in 2016, while 2016 to 2020 is a much smaller improvement.

There’s a myriad of reasons why people would prefer to shoot with their cell phone over a compact, mirrorless, or DSLR camera, and for many of those reasons, a phone will still remain the best option. For even a small percentage of that population of new photographers, however, they might want more from their hobby. Whether it’s more resolution, more editing potential, more lens options, real depth of field control, or something else, it’s likely that only a “real” camera will offer it.

Whether or not camera companies are actually poised to capture (or is it recapture?) this market is an open question. If you’re used to the shoot and share convenience of a phone, shooting, pulling a memory card, importing it into software, exporting it back to your phone, and finally uploading to IG can seem archaic. Tighter integration with computers, editing software, and the ubiquitous phone wouldn’t just benefit those picking up a camera for the first time, but also existing photographers.

The old guard of the camera industry also faces challenges in getting the marketing pitch fine-tuned and in front of the potential customer. Consider the buzz that’ll be generated by the upcoming iPhone announcement. Watch the immediate connection even an inexperienced photographers can draw between the new features and their photos, as can be seen in that keynote announcing the iPhone 11.

I’m not saying it has to be a trendy SV presser, nor have the polish of a trillion-dollar company renowned for their marketing, but they can definitely do better than what they’ve been doing. Take this quote from Nikon’s Z 5 announcement, a full frame mirrorless camera that would be perfect for a burgeoning “influencer” to step up their Instagram game with:

The Z 5 is a full frame mirrorless camera basic model that inherits the superior power of expression and reliability of the Nikon Z 7 and Z 6, while also balancing high-cost performance. It enables the rich expression of a wide variety of scenes, with an FX-format sensor capable of superior image quality and rendering capabilities in dark or dimly lit situations, and support for NIKKOR Z lenses that allows users to take advantage of beautiful blur characteristics (bokeh) to achieve a three-dimensional appearance with their imaging.

Is that going to make sense to anyone who isn’t already well versed in photography (and even Nikon’s existing camera lineup)? It’s a further five paragraphs before you even reach the singular line about Snapbridge, a potentially key feature for photographers tied to their phones.

It’s not just Nikon either. The last focused marketing message for a camera in my mind would be something like the video of the 5D Mark II or the ISO supremacy of the D3. What contemporary camera marketing seems to lack is a clear picture of what problem their product actually solves. “This is a cheaper model of another camera we make” isn’t going to connect in the same way that this camera delivers more creative possibilities with our 100+ compatible Nikkor lenses ranging from fisheyes to sideline-ready telephotos could.

Phone sales aren’t going anywhere. Analysts figure that the 5G rollout could spur a huge cycle of upgrades, while the prevailing pandemic conditions have really dampened the “boyfriend holding girlfriend’s hand on a beach” Instagram market. Instead, what this period should be is a final wakeup call for camera companies. As things return to normal, they have the opportunity to refine their message and reach a market segment that’s looking for something more than their increasingly stale camera phone. This won’t just happen by chance, though. Camera manufacturers need to make a deliberate effort to appeal to them, to potentially change up everything from their marketing to their software and hardware design considerations.

I, like many photographers, started out with just a compact camera. As my passion for the hobby grew, I found that I was running into the technical limits of my gear and upgraded from there. I believe the same opportunity exists for this massive group of photographers who got started with their iPhone, Galaxy, or Pixel; camera companies just have to seize it.