Pentax launched a new “brand vision” recently in preparation for its upcoming product release, going as far as to develop an extensive webpage and supporting video to promote its DSLR cameras. Here are 10 reasons why their camera strategy is in disarray.

Pentax pulls no punches for its new brand vision, running with the strapline:

Pentax believes in the future of SLR photography.

Unpicking that sentence is interesting, because it requires the reader to understand what an SLR is, along with its historical relevance and standing relative to mirrorless cameras. All of that requires some substantial knowledge, as this isn’t a saying the operates on multiple levels. To put it another way, you could read that as saying “all major manufacturers have switched their core development to mirrorless, but we are sticking with the SLR.” The remainder of the webpage mixes history, rationale, emotive commentary, and operational principles. So, where did they go wrong?

1. What We’ve Done, Not What We Will Do: the webpage talks about what they have made, not what they are going to make. You obviously can’t issue product releases, but it’s almost like they are stuck in time.

2. Technical Innovation Isn’t Relevant: Pentax proudly states that they were the first camera manufacturer in Japan to build an SLR as if that is a reason to continue solely producing SLRs. Obviously, if they had stuck with rangefinder or TLR designs back in the 1950s, then they wouldn’t have built the brand they have now. Without actually saying it, the implication is that the SLR is the pinnacle of camera design.

3. Optical Viewfinders Are the Single Most Important Feature: for a webpage with limited technical information, they have to resort to superlatives such as:

…the light passes through the lens, and in turn the optical viewfinder. You view the image directly with your eyes, and feel it with your heart.

Yet, the single central argument is technical — optical viewfinders are the single most important reason for using an SLR. Pentax is saying that they are hanging their entire ILC strategy on this premise, which seems odd when Sony, Panasonic, Leica, Nikon, and Canon are all aggressively pursuing a mirrorless strategy.

4. Non-Speak: the language of the webpage drifts into marketing and advertising through the proliferation of what I would call “non-speak.” For example:

By focusing on the senses of the photographer, these lenses have the ability to express distinct memories and feelings, drawing on natural details to create a sense of quality and of real perspective.

This all sounds nice, but what does it actually mean?

5. Five Principles of Pentax: I can’t argue with any of the slightly woolly principles Pentax espouses. They are worthy in and of themselves and speak to their company ethos, photographic purpose, customer need, manufacturing quality, and overall expertise. It’s that they don’t only just apply to DSLRs, so — on their own — they don’t explain why they are sticking to SLRs.

6. Mirrorless Track Record: what belies Pentax’s “devotion” to SLR is the dire track record they have with mirrorless cameras. They arguably took the most creative strategy in the early 2010s with the development of the Q and K-01. The Q used a 12 MP 1/2.3″ IBIS sensor (5.6x crop factor), making it a truly minuscule MILC. While it had a rich feature set, it was expensive and unsurprisingly (for a small sensor) suffered from mediocre image quality. The Marc Newson-designed K-01 was innovative for sticking with the K-mount but criticized for poor ergonomics. Both cameras were killed off. 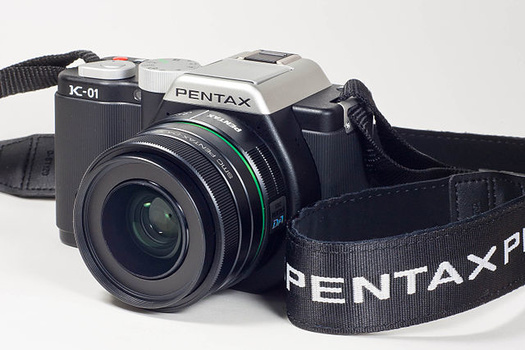 7. What is the future strategy? You would be forgiven for missing Pentax’s development strategy and roadmap, because it isn’t there! What is their plan for the future? They are the only manufacturer making APS-C, FF, and MF cameras. That is exciting; however, the range is shrinking (now listed as four models: 645Z, K-1 II, KP, and K70) and increasingly looking a little old.

8. K-Mount: one of the biggest assets for any Pentax shooter is the great range of K-mount lenses that are available for their SLRs. Strangely, there is no mention of this, which is surely the single most important reason for sticking with the SLR design.

9. Brand Inflation: all marketing is about brand inflation. You make a camera, which may be mediocre or great; however, the job of advertising is to get the consumer to buy it. Pentax does have a product release coming up, but are there other motives for increasing “brand value”?

10. The Elephant in the Room: the webpage finishes with a 30-minute presentation and interview with Planning and Product Manager Hiraku Kawauchi. It isn’t until the 10-minute mark that mirrorless cameras are mentioned, before espousing the magic of the “pentaprism” and optical viewfinders, finally returning to the topic at 24 minutes with the following question from photographer Keita Sasaki: “Does Pentax have any plans to launch a full frame mirrorless model equipped with a new lens mount?” Kawauchi responds, stating: “we aren’t prioritizing either SLRs or mirrorless models. The thing that matters most to Pentax is developing SLR cameras that will provide our users with the ultimate pleasure of photography through the process of picture-taking.” This sounds like he’s saying we don’t favor mirrorless or SLRs, but we’ll only make SLRs. Maybe.

I’ve already commented on Pentax’s future and how it appears to be stalling, walking itself to slow retirement. On the one hand, Pentax has a great heritage and world-class design team that currently have ILC products that span APS-C, full-frame, and medium format. At the dawn of mirrorless in the early 2010s, there was a tremendous opportunity that spawned the Q and K-01. The failure of these systems along with the sale to Ricoh has been catastrophic. Pending the new product launch, where does its future lie? Will it retire its medium format 645Z and simply maintain a streamlined three or four camera full frame and APS-C lineup? Or should it go mirrorless and — if so — use the same K-mount (as with the K-01) or go with a new mount as other manufacturers have done? What will reinvigorate Pentax?

If the new brand vision could be summed up in one line, then it would be this: more of the same.