Why I Rarely Shoot Wide Open: How to Separate Subject from Background 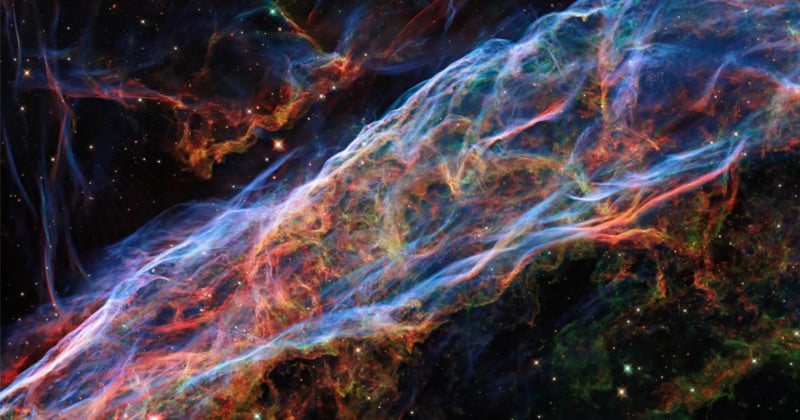 NASA/ESA Hubble Space Telescope has re-released an image of the Veil Nebula that it originally featured back in 2015. This time, significantly more detail has been made visible thanks to new processing techniques.

As Digital Trends reports, the photo depicts the Veil Nebula, the debris from what NASA describes as one of the best-known supernova remnants. The start that went supernova is estimated to have been 20 times larger than Earth’s sun. It’s name is derived from the “delicate, draped filamentary structures.” The entire nebula is 110 light-years across, which would cover six full moons in the sky as seen from earth. It resides in the Cygnus constellation, about 2,100 light-years away.

“The Veil Nebula’s progenitor star — which was 20 times the mass of the Sun — lived fast and died young, ending its life in a cataclysmic release of energy. Despite this stellar violence, the shockwaves and debris from the supernova sculpted the Veil Nebula’s delicate tracery of ionized gas — creating a scene of surprising astronomical beauty,” the European Space Agency (ESA) says.

The photo is a mosaic of six photos captured by Hubble in a small area of the nebula (roughly two light-years across) and therefore only covers a tiny fraction of the nebula’s full structure. The original image uploaded in 2015 can be seen below: While good, it’s significantly lower in resolution than the new process, and the colors and details of the nebula’s structure are far less defined. You can see that below: 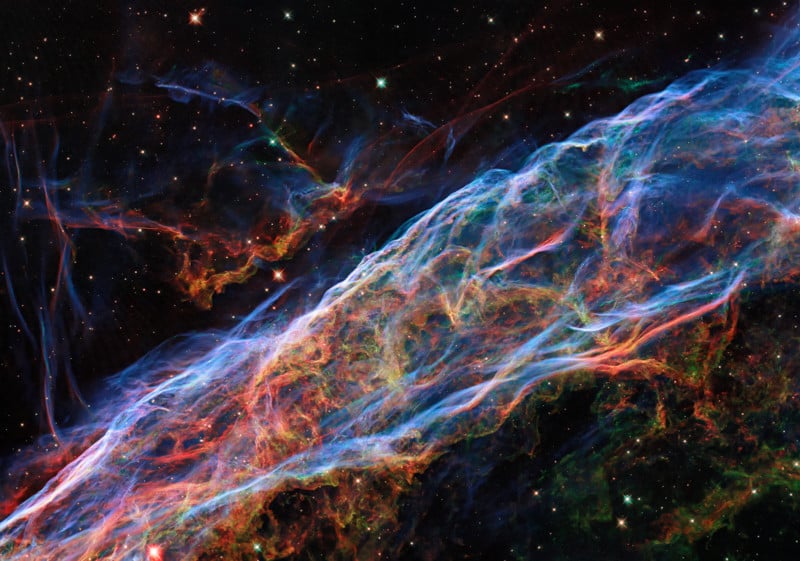 “Astronomer William Herschel identified the Veil Nebula in 1784. His work was followed up by Williamina Fleming’s 1904 discovery of a fainter portion of the nebula, referred to as Pickering’s Triangle (after the director of the Harvard College Observatory, where Fleming worked),” the ESA writes. “The Veil Nebula is best viewed in early autumn from the Northern Hemisphere (early spring in the Southern Hemisphere). Roughly magnitude 8, the nebula is not visible to the naked eye, but it can be seen through a telescope or even binoculars under a dark sky. A nebula filter will help brighten the Veil’s appearance and pull out its wispy features.”

The full image can be downloaded here (warning, the file is quite large).

The ionized oxygen is depicted as blue in the image above, while the ionized hydrogen and nitrogen appear in red.

The Veil Nebula was also featured recently as part of Hubble’s Caldwell Catalog, which is a collection of astronomical objects that have been imaged by Hubble and are visible to amateur astronomers in the night sky.