Kandao’s QooCam Fun Is Easy to Use, But Sacrifices Image Quality

There are a lot of cameras out there that are aimed at the burgeoning “vlogger” segment, from interchangeable lens cameras with flip-out screens, to converted action cameras. Kandao takes a different approach, repurposing some of its 360 technology to create the QooCam Fun.

Does it work? The answer is yes and no.

There has been a small niche market for phone-based 360 cameras. Insta360 has largely moved into this space in the past few years with the Insta360 Nano and Nano S for iPhones and the Air for Android phones, but even though the products are listed on Insta360’s website, they are no longer available for sale in most places. It’s perhaps sensing this hole in the market that Kandao moved in with the QooCam Fun, though in its current iteration, it’s limited to Android phones sporting USB-C connections. Not a problem for me, as I’m an avowed Pixel fan.

Kandao’s implementation leans heavy on the 360 side of the camera and the benefits it can bring to vloggers. For me, the biggest advantage is the ability to reframe the footage after the fact and focus on exactly what you want in editing. It takes a lot of the thinking out of the shooting and makes it easier to focus on what’s in front of you rather than what the camera’s lens is capturing. After several consumer/prosumer 360 cameras (the QooCam and the QooCam 8K), Kandao finally has its app and supporting software in good enough shape where I’m not writing another article panning a 360 camera manufacturer’s software. Kandao’s QooCam App is stable and feature-rich.

It’s a solid move by Kandao to shore up the app ecosystem for its cameras, because that’s the biggest strength of the QooCam Fun. It, more or less, seems to take the 360 bits of the QooCam and shrinks them down into a small package. Video comes in at the same 3840 x 1920 resolution at 30 fps, which, while not quite acceptable in 2020 in a full-on 360 camera, becomes a little more palatable when you consider the camera’s $169 price tag and form factor. Photos are a little lower resolution than the original QooCam, also coming in at 3840 x 1920. There’s also the requisite live-streaming option that’s on every camera. 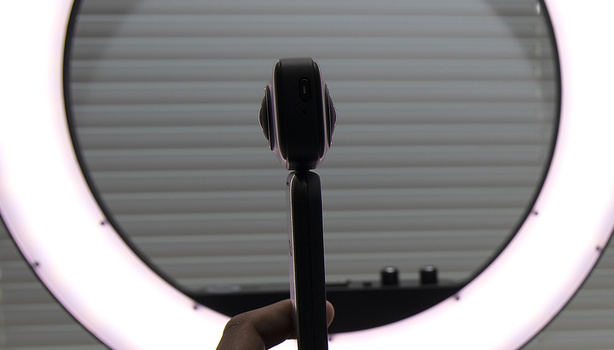 That form factor is a positive change for this new model. It takes all the complexity out of the QooCam, and 360 cameras in general. It just works. Plug it into the phone, the QooCam app launches, and you can get to work taking 360 photos, videos, or 2D “Super Vlogs,” a mode which does all the work for you. You can also make 2D, 4K video from 360 video shot with the camera, making Super Vlog mode somewhat superfluous.

There isn’t much in the way of manual controls for video or photos (you get exposure compensation and that’s it) but this isn’t meant to be a professional camera and most users won’t touch controls beyond that. Photos and videos are all routed through the app; There’s no memory to download files onto a computer to work with, it’s all processed on your phone and easily dispatched to whatever social media you want to load it on to.

While stuffing the basics of the original QooCam into a new easier-to-use format works well for novices, I reviewed the original QooCam in early 2019, and even then I felt like the image quality and feature set was just a step behind other cameras of the day. If you’re reading this site, you probably want to know how the image of the QooCam Fun quality stacks up, and the unfortunate reality is that it doesn’t.

Kandao provided me with a review QooCam Fun unit, and after coming off the high of the QooCam 8K, which I still consider the best 360 camera for the money, I was expecting a lot more out of the QooCam Fun than it was able to produce. I wasn’t expecting QooCam 8K levels of detail, but I at least expected it to beat a smartphone.

The original QooCam’s 9 MP photo resolution was sub-par for its day, and it’s even lower here. Coupled with what seem like lower quality, somewhat fuzzy lenses to fit the smaller form-factor, and average image processing that leads to lots of moire and mushy colors, and you have a solution that’s not really fit for discerning photographers. My first tests at a pumpkin patch looked so bad that I thought I had accidentally smudged the lenses. I didn’t, and even with a thorough wipe-down with a lens cloth, images looked no better in my second shoot in easier conditions. You can see for yourself in this video:

To convince myself I wasn’t going crazy at my impressions of the camera’s image quality, I compared it with the similarly priced (but wholly different in mission and functionality) Insta360 Go. I wasn’t going crazy, the video quality doesn’t even seem to match the much older QooCam, which itself was average for its day. Yes. the QooCam Fun can shoot 4K videos for your blogs, but I’d take the higher-quality Full HD video. Even downscaled from 4K, the footage from the QooCam Fun looks rough.

At the end of the video, I gave the QooCam Fun another go on a cloudy day, what should be easy lighting for any camera, and you can see that not only did it get the lighting wrong, the Super Vlog mode created some insane stabilization errors, worse than the gnarly tilting that can be seen in some of the other clips. The still image quality was disappointing, to say the least:

You can see the above image in 360 here, where it doesn’t get much better.

While a big advantage of something like the QooCam Fun over an Insta360 Go, aside from 4K video, is the ability to record 360 video for longer times and the ability to see what you are shooting through the phone, the image quality could be a deal breaker for some. It’s difficult to say good things about the image quality even in the best of light. This really comes as a shock to me, as I rate the same company’s QooCam 8K as the best in image quality this side of a Titan.

The QooCam Fun brings a lot of ease of use to the party. It’s easier and faster to use than any other 360 camera I’ve used to date, and I’ve used many. However, the price to pay for that ease of use is a severe hit in image quality. Personally, while it’s a more expensive choice and time-consuming choice, I’d step up to a full-featured 360 camera (like the QooCam 8K) and deal with the workflow for the significant increase in quality.

If you prize speed, ease of use, some (limited) 360 capability and price above all, the QooCam Fun might be worth a look, but it’s worth noting that almost any other camera on the market will provide better image quality than what you get here, even if it means adding a little bit to your workflow.