A Guide to Traveling with Lithium-ion Batteries as a Photographer 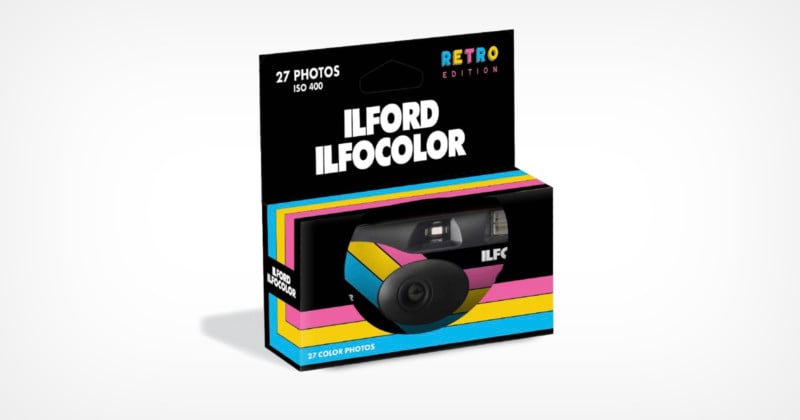 Ilford Imaging is jumping back into the production of disposable cameras with the announcement of its Ilfocolor Rapid Retro Edition Single Use Camera. The brightly-colored camera supposedly pays homage to Ilford’s past with its range of Ilfocolor negative films.

It should be noted that this is a product from Ilford Imaging, which is not to be confused with Ilford Photo — a different company owned by Harman that has been producing disposable cameras for some time.

The Ilfocolor Rapid Retro Edition comes pre-loaded with 27 exposures of ISO 400 color negative film and a fixed-focus 31mm f/11 lens with a fixed shutter speed of 1/125 second. The camera supposedly will capture sharp images as close as 1 meter away. The Ilford Rapid also comes with a AAA battery that powers the classic disposable camera flash that has a 15-second recycle time.

This particular retro edition camera is a throwback to the 1960s not just in its design but also in the color negative film that it comes loaded with. According to Decisive Moment, it was surprising that Ilford had not released its own color film from that period after both Kodak and Fujifilm are having such success with the surging demand of both their color films and while this isn’t the same as selling the film separately, it’s still a step in that direction for those who were yearning to use classic Ilford color film again.

Ilford is just the latest in a string of companies jumping back into disposables as they have exploded in popularity recently. Lomography, Yashica, and most recently Fujifilm have all released new versions of single-use cameras lately. Even Supreme is releasing its first limited-edition disposable camera with its logo emblazoned across the body.

The popularity of the format may bring back nostalgia, but it doesn’t solve the issue of waste. Many of these cameras feature plastic parts that, while companies like to claim is recyclable, is often not.

Multiple software companies have tried disposable-themed camera apps that mimic the retro experience in an attempt to capitalize on the craze digitally. The most notable would be the troubled Dispo, which has recently seen an upheaval in its business as allegations of misconduct among his group forced the founder to resign from the board.

The Ilford Rapid Retro Edition disposable camera is currently only listed for pre-order in Australia, where it retails for between AUD18.90 and 19.95, but Inside Imaging quotes that the camera should retail in the United States for $15 when it becomes available in early May.