An email I received this week stopped me in my tracks. For two things so important to me — mental health and photography — I don’t do enough to discuss it. So, I’m going to change that.

In 2016, I wrote an article about anxiety and photography. Over the years I had struggled with mental health, having many peaks and troughs. I lived alongside anxiety for so many years it became a specter at every feast that I was used to and expected to be there. As I quieted him, I began to think less about the struggle and the steps I took to overcome its dominion over me. That’s good for me, but if I don’t share those steps in the hope they may help somebody else, that’s rather selfish, or at the very least, thoughtless. Unfortunately, I was one or both of those, save for an article in 2016 on the subject, and an email this week has prompted me to do better.

I woke up to a message a few days ago from a young photographer struggling with anxiety. I won’t name this person, nor will I go into the details of their problems, but one question they asked of me was cause for thought. This photographer had anxiety when it came to shooting portraiture and didn’t know how to get past it. My article from 2016 that he had read didn’t address that, and he wondered if I had any advice. I had also suffered from that type of anxiety, and though it feels far back in time now, it isn’t really, and in fact, it’s recent enough that I can dissect my steps in getting past it. So, I responded to the email, but now I’m going to go into some more depth.

The first question we need to address, however, is why you’re anxious about taking portraits in the first place. 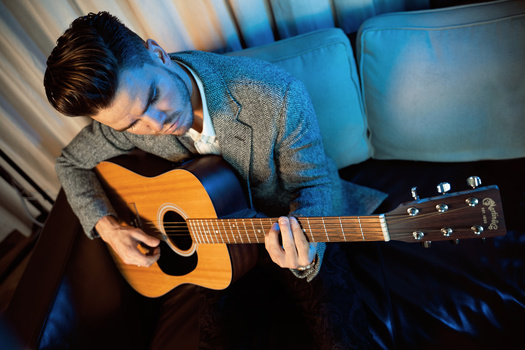 There isn’t one reason; each person will have different reasons for being anxious about taking portraits, but here are some of mine and some of other photographers I’ve spoken to over the years:

These all stem from imposter syndrome, which is so common in all creative endeavors. That feeling like you’re not a real photographer, you’re just pretending. Every photographer I know, when they have taken on a big shoot for them — by which I mean one of the most important to them — has felt like they’re just faking it. It doesn’t matter if you’re shooting a cover for Vogue or have arranged to do headshots for somebody you know, whenever you’re pushing yourself into unchartered territory, doubt creeps (or floods) in. I won’t name names, but this happens to photographers at the very highest level too. The important thing to do is to push past it. But how?

The issue with being at the start of this journey is you’ll likely look at the end and note how far away it feels, that it’s inconceivable that you could get to that point and for all intents and purposes, it’s impossible. I remember that in my early days, I would see photoshoots other photographers were doing of celebrities or for magazines, and I would be able to almost will a panic attack out of clear blue skies by torturing myself that my anxiety will never let me get to that point. This sort of meta anxiety was common for me, and I would worry just how much my anxiety would prohibit me doing. To alter the context of The Eagles’ classic, Wasted Time, I could have done so many things, if I could only stop my mind.

Well, gradually, I made progress through trial and error and forcing myself to fight when my body was intent on flight. Looking back, it was the granular nature of my progress which underpinned its success, and so, I want you to stop looking at top photographers and not having a clue how to bridge that gap between you and them, and start looking at taking steps forward, one by one. Here are the steps I would suggest.

I want you to find one of the people on this planet you feel the most comfortable with. It doesn’t matter who it is, what they look like, or anything else about them. All that matters is you’re comfortable with them and they are willing to help you. With this person, you’re going to practice portraiture. Try to recreate any style of shot you like, experiment with locations, lighting, poses, and so on. You never have to publish these (and the chances are, the subject will require that as a condition!), and no one ever has to see them. Don’t overload on information. All you need to do is practice and enjoy learning how different portraits come out in different scenarios. Once you’ve done this for a while and have some shots you like, it’s time to take the next step, which is small.

Find an image or style of image you have created that you like, and create it again. The subject can be the same, but change the location. Then, do this one more time until you know you can create that sort of image consistently. It doesn’t have to be some complicated, three-light, heavily stylized portrait. One of my first standard shots was a natural light, face-on headshot. I learned exactly which lens, what settings, what pose, and what steps I needed to take to get the same sort of image every time. This is crucial. Once you’re confident you can do that, some of the fear is alleviated. 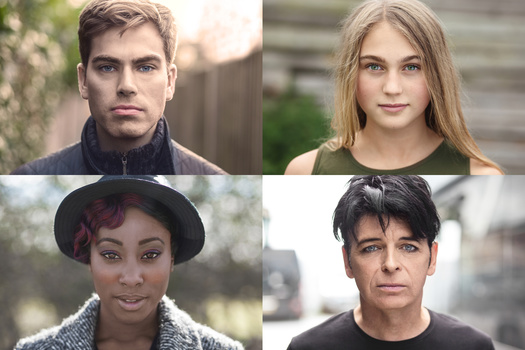 These weren’t my first portraits, but they were an important cog in my confidence, and I ought to have done it sooner. I began with my closest friends and family members (top left), then friends of friends and friends of family (top right), then private clients who were usually actors, presenters, or anyone who used a headshot (bottom left), and finally celebrities for publications or personal (bottom right, Gary Numan). I don’t take this style of shot as often these days, but the series has more than 50 people in, with everyone from my cousin and my godfather, through to KT Tunstall and Afrojack. Learn how to be consistent, even with simple shots. Let those shots become your bankers — the image you know you can always come away with.

It can take some time before you’re comfortable directing the image you can create, but you will get there. A lot of the time, anxiety is just a lack of experience performing something; the more you do it, the less anxiety you will feel. Once you’ve reached a point where you can create an image over and over, it’s time to shoot somebody you don’t know. I would suggest a friend of a friend. Perhaps ask people who you have taken the shot if they can recommend anyone who would like it too. Promise nothing else, and you don’t have to attempt anything else either. You will produce the shot you have done of the person they know, for them.

Take as many images in the style you’re comfortable with as you can with as many people as you can. Approach anyone and everyone, explain it’s a series, and take the shots in all conditions and of all subjects. Once you have developed some confidence in reproducing that shot, it’s time to add in pressure-less experimenting. What I mean by this term, is this: after you’ve got the shot you set out to take, ask the person if you can try a few other ideas. I would suggest having a Pinterest board full of portraits you like, here’s one of mine.

Have this on your phone for inspiration, and just try a few shots. If nothing comes of it, it doesn’t matter; that’s not why you were taking pictures of that person anyway. What you’ll find, however, is you do get a shot or two you like.

What you will likely find is that the experimental parts after your main shot will become more and more useful and yield better and better results. You can start building on the complexity of shots you want to try, add in lights or more lights, elaborate poses, specific locations; just keep experimenting. You will naturally grow into being able to come away from little portrait sessions with multiple images. With more experience, more shots and shoots under your belt, and growing confidence, you’ll be able to start taking on harder and harder shoots.

If you feel there is a gap between what you currently do and you adding layers to your portraiture with people you don’t know, simply go back to experimenting on someone you are comfortable with and trust. To this day, if I’m going to trying something new, I’ll often practice the technique beforehand.

I am not a mental health professional, nor some self-anointed personal development coach; I’m simply a person who has gone through a lot of these anxieties throughout my career, and for the most part, conquered them. Before big shoots, I still get jittery, checking every piece of equipment three or four times and so on, but that’s just the way I am; it no longer blocks my path.

The Photographer’s Guide to Finding Models on Model Mayhem