A girl, perhaps barely in her teens, stands alone in a dimly lit room, her hair obscuring her face. She’s naked from the waist up, the front of her torso is visible, and she wears little more than socks from the waist down. The caption labels her a child prostitute and lists her hometown. Until this week, this photo was available to purchase from Getty Images.

(Please note: this article does not even share an edited version of this photograph because the room in which the child stands could make her identifiable. I never want to see this image again.)

Over the past 10 days, Getty has removed a number of images — possibly in the hundreds or thousands, though the company will not confirm the figure — from its archives. Photographs of sexually exploited children were available to purchase, a small number of which were indecent. Many featured children that were identifiable, often with captions that included their full name, age, and location.

The issue was raised with Getty last week, observing that UNICEF, an organization tasked by the United Nations to protect children, is unequivocal on whether this is acceptable. There is no journalistic justification for identifying a sexually exploited child. Names should be changed or omitted, faces should be obscured.

It’s also worth noting that U.K. law makes it clear that victims of sexual abuse or exploitation — adults and children alike — must be given anonymity for life from the moment that an allegation is made. How photographic agencies around the world have been able to ignore this as a guiding principle for so long is an appalling indictment of their ethics.

In the world of photojournalism, photographs of suffering, vulnerable, and exploited children from developing countries are almost a currency of their own. The intentions of the photojournalist — usually from the West — are typically noble, seeking to shine a light on people’s misfortune.

In the image above, the caption names the child, describes her as a “low-paid prostitute,” and gives the part of the city where she works. “An inordinate desire for physical pleasure led her to choose this trade,” it continues, “through which she can satisfy her insatiable craving for wild sex.” The child is 14 years old.

In describing its corporate values, Getty says: “We strive to treat all people, with respect.” The image has since been removed.

Critics frequently draw a comparison between the treatment of children in developed countries with that of the rest of the world. A child being sexually abused and exploited in the U.S. would never have their face, identity, and location shared and sold on the internet by a huge corporation, so why are children from Asia, Africa, and South America frequently treated differently? 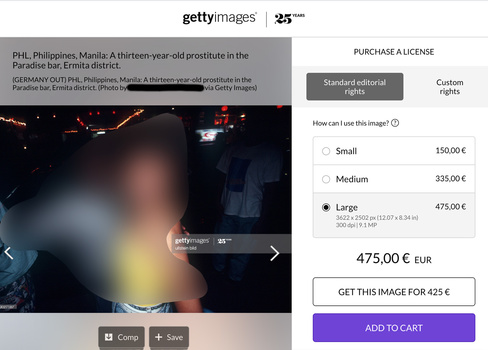 Robert Godden, director of human rights advocacy group Rights Exposure and former advisor to Amnesty International, argues that the justifications offered by photojournalists are sometimes misguided. While photography can be a tool for change, its impact can be exaggerated. Godden told me: “The truth is often that the issues are well known in the country where they are happening and that ‘exposure’ is not always the most effective intervention. When photographers and agencies justify an image through a generic claim of advocacy potential, we really need to interrogate that claim. This way, we stop it being used as a justification, and it allows us to understand when and where photography has most utility.” Selling an identifiable image of a child that has been subjected to sexual exploitation or abuse through a stock library strikes me as hard to justify.

“We know that what we do matters in the world,” says an archived version of the Getty website, “and that our images are trusted only so long as we hold ourselves to high ethical standards.” Anne Flanagan, Senior Director and Head of External Communications informed me of the following:

We reviewed our archive for compliance with our contemporary guidelines. As a result of this review, we removed a small number of images from the site and will be notifying impacted contributors and partners.

While it’s reassuring to see Getty taking action to address these images, it’s concerning that despite multiple requests, Flanagan was not able to provide me with the corporation’s policy on its licensing of images of children. “Be Trustworthy, Transparent and Open,” the archived version of the Getty website tells its staff. “Be authentic; insist on honesty and integrity. Raise the bar. Be bold; strive for excellence; don’t settle for less.”

Right now, the pages on Getty’s website detailing its values are broken: it’s a series of titles and no text. Hopefully, this is not a reflection of Getty’s recent decision to remove the images, as the photographic industry and the people it serves needs more than bold statements and nothing to go with them.

This Microscopic Time-Lapse of Chemicals Crystalizing is Hypnotic