The Insta360 Titan has to be the most aptly named 360 camera on the market in many senses of the word. Size, image quality, price tag — take your pick. The Titan delivers on its name in all of those ways, but is it worth it?

Let’s start with the basics about the camera and why it sits at the top of Insta360’s food chain. It features 8 lenses hooked up to Micro Four Thirds sensors. That alone is a lens/sensor combination that’s larger than most other all-in-one 360 photo/video solutions out there. It features 4K live streaming and the potential for 8K live streaming with the company’s special Insta360 8K Live software (if you’re say, the NFL or NASA.) The headline feature, though, is the ability to record in 11k, or 8K with 10-bit color. You can get some insane resolution or some excellent color fidelity (with still-insane 8K resolution). Photos clock in at a hefty 10560 x 5280. You can shoot 2D or 3D photos and video. In short, pretty much any 360 project you have in mind, the Insta360 Titan will be comfortably overkill, which is not necessarily a bad thing. After all, even if your final output is 4K or 8K, having the extra resolution to down-res from will still give you better image quality. There’s also an i-Log mode for advanced color grading options and a microphone input.

The downsides? At $15,000, the camera costs more than a Chevrolet Spark. It’s the size of a basketball and weighs just over 12 pounds. While YouTube can display 8K video, 11K is not quite there yet, and you’d need Insta360’s special “Crystalview 11K” software to take advantage of the extra resolution for people to see it properly. The camera also crushed every poor light stand I had that was just fine with every other 360 camera, including the Insta360 Pro 2 that the company loaned me last year. That’s because this isn’t any other 360 camera. Take a look at raw and slightly graded footage from the camera:

There’s not much editing involved in this video because the frank reality is that 11K 360 video simply doesn’t edit well on computers that most mere mortals can run. While my i5 processor and NVidia 1060-based setup works well with most conventional 360 cameras that shoot up to 5.7k video, 8K is a little dicey and 11K brings it almost to a grinding halt. Almost. As much as you’re shelling out for the camera, you’d better be prepared to spend some extra money on a decent editing machine.

On the stills side of things, computer requirements are a little more modest, and the results are stellar. While cameras with one Micro Four Thirds sensor are decent when it comes to dynamic range and low-light performance, eight of them hooked up to eight lenses provide sublime image quality almost on par with a DSLR on something like a Nodal Ninja. The added advantage of a Titan setup over that (aside from the ability to capture video, of course) is that the picture is taken instantaneously, so if something is moving in the image, you can actually capture it, versus needing a stationary scene without movement for the DSLR setup.

Other advantages over the 360 competition include the ability to shoot raw photos in DNG format, as well as take long exposures. Photos show heaps of dynamic range, sharpness, and no color fringing that you see from the extreme edges of the fisheye lenses used in two-sensor, two-lens setups. Take a look at the results:

If someone is stepping up from a Pro or a Pro 2, things will feel familiar. The camera uses its own app, but it’s extremely similar to the Pro apps. It works pretty well, and the range of the camera can be extended in a similar fashion to the Pro 2 using Insta360’s Farsight Monitoring system. Setup is a bit complicated and the transmitter and receiver add a lot of extra parts, but it’s worth it if you need the range. Farsight has been around for a while, and at this point, it’s a fairly proven system from Insta360.

The controls on the camera itself are fairly comprehensive. While you won’t be able to set manual exposures and such on the camera, you can access most basic functions to start shooting photos and videos without connecting with an app. That said, my current favorite consumer camera, the Kandao QooCam 8K, manages to cram manual exposure controls onto the camera body itself, so it’s something that’s definitely possible. 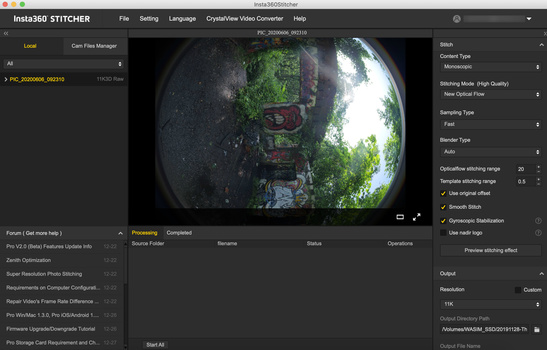 Insta360’s desktop software is well-sorted, and the Insta360 Stitcher works swiftly and seamlessly to stitch footage and photos. There’s a neat trick with the camera where you can plug it in via an adapter into the ethernet port to pull the footage off the camera directly. No more having to take out SD cards to load into a complicated card reader setup. Insta360’s software is probably amongst the most mature suite out there, and it shows in little touches such as this.

The maturity in Insta360’s software made me a bit surprised at the issues I ran into with the hardware. There are some things you expect to run into at the professional level. For instance, 11K video can cause overheating if you turn off the loud fans, which the camera warns you plenty about, and startup and shutdown can take a few minutes. But I also encountered a lot of things that I didn’t expect that sometimes caused me to lose photos entirely, which is no good for a camera aimed at the professional market.

I had more than a few occasions where the camera would start up and not be able to read the SD cards (9 of them!) mounted in the camera. I’d have to manually pull the cards out and restart and only sometimes would the camera read the cards without making me do the process again.

Other times, I would take a picture only to get an error 462 or 463 and have the camera crash, taking the last photo with it. That sort of problem is maddening when you’ve just taken an exposure of several minutes or if it’s a moment you can’t repeat.

Insta360 representatives informed me that the 462/463 errors were “caused by an unsuccessful module initiation” that is common to pre-production units, which they told me my review unit was. I’m also told that the SD card errors would require a deep format on a PC, and then again in the camera because of file fragments left on the cards. Not something that’s entirely intuitive for photographers who are used to best practice being to format in the camera, but good information to know.

Which brings me to one of the issues that are most pressing with this type of camera. Something that costs $15,000 is undoubtedly going to be used in a high-stakes production or for a demanding client. With 8 different lenses and sensors, 9 memory cards, and a body that requires several fans to keep cool, there are any number of points of failure that can occur on a shoot with this camera. Have a backup handy and if you can, shoot more than one clip or photo of your scene. As a university professor, I used this camera to record our facilities for a 360 tour so that students can experience what our school is like even if they can’t be there because of the Coronavirus. These failures caused me to lose more than one photo, but at least I took several so I didn’t miss a spot entirely. The quality of the camera was worth the extra work and risk:

But all of that brings me to another, more pressing issue for photographers on a budget — is the camera worth $15,000? How close does a consumer camera come? For a comparison, here’s the QooCam 8K from the same spot for photography:

Obviously, a consumer camera will never come close to the Insta360 Titan when it comes to video. Most professional cameras won’t. You’d need to build a pretty custom setup. And, objectively, even the very good QooCam 8K doesn’t touch the Insta360 Titan for photos. The QooCam image took about 45 minutes of detailed editing to remove chromatic aberrations and make sure stitches worked well, whereas the Insta360 Titan image of the same scene was pretty much a straight stitch out of the camera without any editing. How much is your time worth, and will your clients notice the difference? That’s up to you to decide.

The Insta360 Titan is hands down the best all-in-one solution for 360 video and photos. That said, it’s a camera that’s highly specialized and that carries with it a lot of caveats. It’s not an action camera that you’ll go skiing with; It’s heavy, cumbersome to set up, and has the potential for any one of its many parts failing and stopping your shoot cold. You need a supercomputer to edit the footage. You won’t be taking vacation snaps with this, and if you tried, you’d probably get a lot of questions from security guards and police.

But that said, if the price tag and the compromises are ones that work for your budget and shoot, then you’ll be rewarded with 360 content that looks so sharp and detailed, it will make you forget how much you fought with the camera to get there. The quality of the images out of this 360 camera outpaces every other model on the market.

Click the following link to purchase the Insta360 Titan.