May 1, 2011 "Much has been made of this photograph that shows the President and Vice President and the national security team monitoring in real time the mission against Osama bin Laden. Some more background on the photograph: The White House Situation Room is actually comprised of several different conference rooms. The majority of the time, the President convenes meetings in the large conference room with assigned seats. But to monitor this mission, the group moved into the much smaller conference room. The President chose to sit next to Brigadier General Marshall B. “Brad” Webb, Assistant Commanding General of Joint Special Operations Command, who was point man for the communications taking place. WIth so few chairs, others just stood at the back of the room. I was jammed into a corner of the room with no room to move. During the mission itself, I made approximately 100 photographs, almost all from this cramped spot in the corner. There were several other meetings throughout the day, and we've put together a composite of several photographs (see next photo in this set) to give people a better sense of what the day was like. Seated in this picture from left to right: Vice President Biden, the President, Brig. Gen. Webb, Deputy National Security Advisor Denis McDonough, Secretary of State Hillary Rodham Clinton, and then Secretary of Defense Robert Gates. Standing, from left, are: Admiral Mike Mullen, then Chairman of the Joint Chiefs of Staff; National Security Advisor Tom Donilon; Chief of Staff Bill Daley; Tony Blinken, National Security Advisor to the Vice President; Audrey Tomason Director for Counterterrorism; John Brennan, Assistant to the President for Homeland Security and Counterterrorism; and Director of National Intelligence James Clapper. Please note: a classified document seen in front of Sec. Clinton has been obscured." (Official White House Photo by Pete Souza) This official White House photograph is being made available only for publication

Pete Souza needs little introduction. As the Chief Official White House Photographer for two presidents, Souza had the crucial duty of documenting innumerably many historical moments, a job he did with an empathetic touch that has made his work the model for many aspiring photographers. I recently had the chance to speak with Souza about his work, his approach, and his new film.

As Chief Official White House Photographer for both President Ronald Reagan and President Barack Obama, Pete Souza has been witness to countless moments in history and has documented them in a way that uniquely humanizes his subjects and shows remarkable creative range. Now, he is the subject of “The Way I See It,” a moving documentary directed and produced by Dawn Porter that follows Souza’s life as a photographer and how his images captured history that helps to explain the current state of American politics and society. The film also follows Souza’s own personal arc that brought him to a place where he uses his work and powerful voice to comment on the issues facing American people.

Already a few minutes past my 10-minute interview slot, I knew I had to respect Souza’s busy schedule and asked him if he had anything to add before I let him go. I had been picking and choosing questions from my list in real-time while keeping an eye on the clock, as I knew I wouldn’t be able to ask them all in time, but the excitement of speaking to someone I admired so much made it difficult to choose which to leave out and which to ask. As I mentioned I should let him go, Souza, aware of my excitement, immediately exclaimed: “No, go ahead. You can ask more questions.” 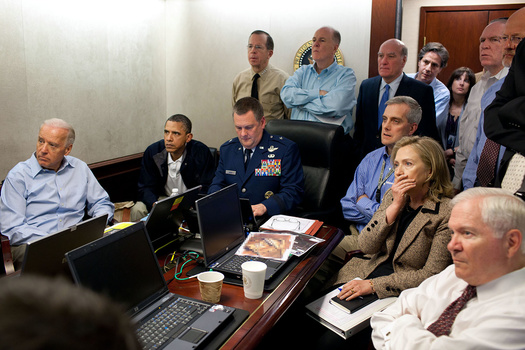 That sort of gentle kindness and awareness of the other person seems to be the thread that runs throughout both Souza’s work and “The Way I See It.” In fact, in the film, Souza talked quite a bit about the importance of creating “authentic moments.” For him, this meant “learning how to almost disappear in the room,” opting to try to move as little as possible and choosing to use quiet cameras without flash, shooting single frames instead of bursts. Souza says that with decades of experience, he built a keen sense of anticipation that allowed him to be ready for each moment as it arrived. 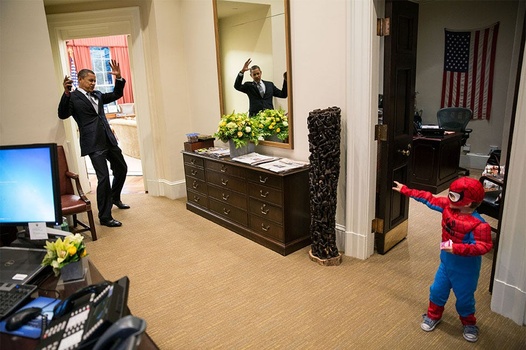 The Chief Official White House Photographer is in a unique position, capturing important historical moments, but also photographing the private life of the first family and the trial and stresses the president, as a single human being, has to endure. As such, just as it is important to be ready for moments as they happen, it is crucial that the White House photographer know when to back off. Souza discussed the importance of building an intuition for this, particularly when capturing President Obama with his family:

I would try to make some pictures, but I’d also try to give him some space after a while. And that was just an intuitive thing. I didn’t want to ever make his daughters feel uncomfortable, that they were being photographed. 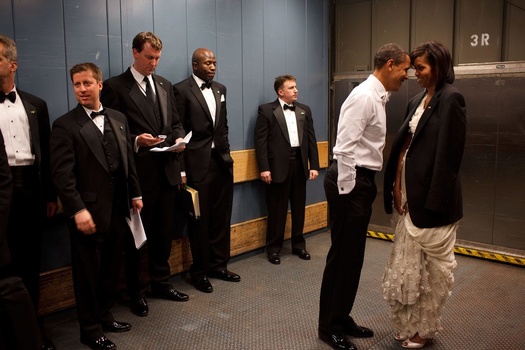 One thing that always struck me was Souza and President Obama’s relationship, as it was clear that the two were good friends, something that began during Souza’s time covering then-Senator Obama. And their friendship left a big impression on Souza, who discussed what it was like being with the president during some of his most trying times:

I think one of the first times we had a tragedy where he had to go and meet with families that had been affected was the shooting at Fort Hood. There is no playbook for how you do this. You just have to be compassionate and empathetic to begin with. You have to be inherently that way. And if you’re not, then you’re not going to translate that to these people who are hurting. But you can imagine, you walk into a situation like that and you don’t know what these people expect from you. And it turns out they just want a hug. They want to be able to tell you about their loved one that was shot and killed in the Fort Hood instance.

Souza went on to discuss how these moments affected him and how careful he had to be to document them without being obtrusive during someone’s time of grieving, something he relied on his intuition to gauge. He noted just how “draining” these moments were on both those who had lost someone and the President, who wanted to “convey empathy and compassion.” He said despite how many times the President had to do this during his eight years in office and the toll it took on him, he felt it was his job to “go there and comfort those people as best he could.” Souza went on to mention that he saw the same compassion and empathy in Vice President Biden, especially after the intense personal tragedy Biden has faced during his life.

One thing I find admirable about Souza is how he has used his experiences and work to fight for things he believes in after he left the White House, both through his book, “Shade: A Tale of Two Presidents,” and his Instagram account, where he uses his work to juxtapose the Obama and Trump presidencies. Souza is not unaware of the criticism this has brought him, but as someone who worked for “arguably the most iconic Republican president of our generation and the most iconic Democratic president of our generation,” he views his work not as a partisan endeavor:

It’s more about showing the dignity of the Office and what that really means and contrasting it to the reality show of today. 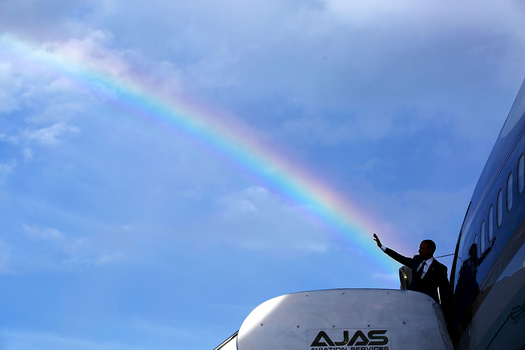 Souza went on to say that he thinks photojournalists need to be careful when it comes to being activists and that they should “let their pictures do the talking,” but that he felt in this case, he had to speak out. It’s also important to note the distinction that Souza is not currently an active photojournalist in the specific arena he is addressing with his activism.

That naturally led me to ask Souza about the importance of the White House photographer having access to the president on a regular basis. Of course, for the purposes of history, he thinks it’s “extremely important.” However, in the case of President Obama, there was the confluence of a great working relationship and the dawn of social media that took that to another level:

And I’m not saying that every president should do that. But in terms of history, it is extremely important for the White House photographer to have access, to show for history, what the President is like, what is going on in the presidency. I think those are valuable, more than valuable, images for history. And if Joe Biden is elected, I will be reaching out to his photographer to remind him or her what this job is supposed to be. That it’s not for social media. It’s for history. And that you’ve got to make sure that you do have access to everything. I may even talk to Joe Biden about it myself.

I think he respects me, and I think he gets it too. I think he understands the importance of allowing his photographer to have the kind of access that I had with President Obama.

When I asked Souza of his favorite memory with President Obama, he said there were too many to choose one, but in a more general sense, being able to witness important history every single day. 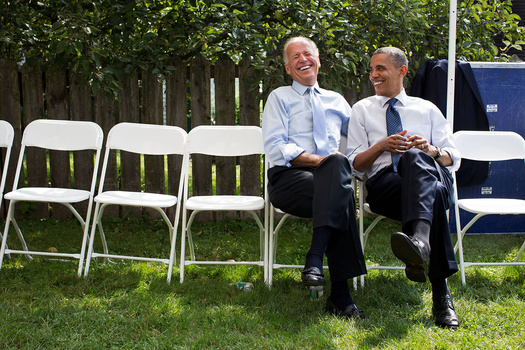 Pete Souza has had a remarkable career, and I’m excited to see what he does next.

“The Way I See It” is currently playing in theaters and will air on MSNBC on October 9 at 10 pm ET, with repeated airings to follow. I had the chance to see the documentary, and I think it is well worth watching. Of course, you’ll see hundreds of Souza’s best photos and hear him talk about how he captured them and the stories behind them that only someone who was there can tell. But beyond that, the film strongly shows the importance of photojournalism in an age of shrinking photography departments and cell phone videos replacing the work of professionals, all wrapped up in an examination of hope, empathy, and humanity. I think photographers in any genre can learn a lot from Souza.