You Might Not Need a Gimbal With the a7S III

In this article I will be giving some insight behind the creation of my latest video, “Green Heron: A Cinematic Portrait,” which includes dealing with gear limitations, working with music and sound effects, and forming wildlife footage into a story.

First, I’m not exactly equipped at the moment as a videographer. However, I do acknowledge I am far better off than many people when they are first interested in making movies simply because I’ve already dug in as a bird stills photographer. Diving into this whole video thing head first and soaking up all the information I can, I’ve read some really disgusting opinions on various online forums about how no one should even bother being out there if they don’t have the proper gear. Unbelievable. On the other hand, I’ve also been catching up on the Master Wildlife Filmmaking podcast and each distinguished professional guest has shared the same sentiment that you start making movies with whatever you have and to not go nuts thinking about the gear. Encouraging.

I have an old tripod that is probably being crushed under the weight of the video head alone. The video head is overloaded and unable to counterbalance the weight of the camera and lens. I also have essentially no audio equipment. Yet, instead of sitting on my hands, I decided to give it a go and play to my strengths. I know what good images of birds look like. I know bird behaviors and what would be interesting to focus on. And if anything, I knew I could at least get my lens pointed at something and lock it off there to film. 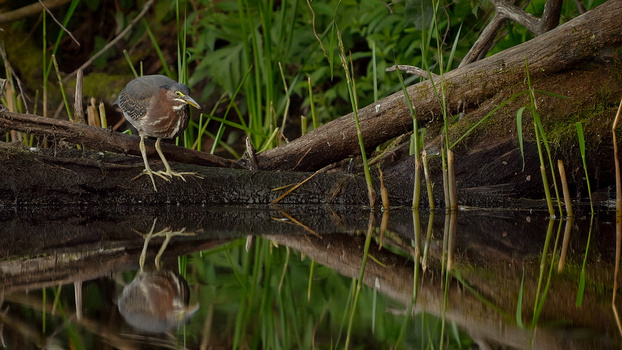 Whenever I’d have a green heron in front of me, I’d start off with static shots of the bird doing its thing. If time was available, I would try other things like switching file formats from 4K video to higher frame rate 1080p recording for slow motion. After I got the basics shot, with a patient bird I could move into more ambitious techniques such as panning the camera around with it. Usually this would create a lot of visible shake in the footage with my puny support system, but I knew some of it could be smoothened out in editing. As time went on and I knew I had enough good looking locked off shots, that really allowed me the freedom to make more compelling imagery.

Without clean audio to work with, I made my own. Using the sound effects library at Epidemic Sound, I found some fitting foley and learned to layer it up and mess around with the equalizer to make it fit to the best of my abilities. Before editing the Green Heron video, I practiced this technique in a previous video shown below along with some Instagram posts.

It was my original intention with the Green Heron video to have added sound effects throughout, but that plan changed after I made a rough cut with only the ambient sound in the beginning. Watching and listening to the cut many times over, I enjoyed it too much to want to keep prodding away at the sound design. There was also the possibility that working above my skill level would be too noticeable and distracting, so pacing myself in this regard was maybe for the best.

Next was dealing with the music. Working with video footage set to music, it’s a challenging act to balance the time limit, the song’s pacing and structure, the story being told, and the pile of clips that could be assembled in infinite ways. For this I was much more prepared having edited a number of popular bikes videos back in the day. It really helps to have most if not all of your clips ready to go for this step rather than starting off an edit and filming more as you go. Seeing the “big picture” with all available options somehow always seems to work itself out once you get going. It will become apparent which clips would work best with the delicate musical buildups or lulls, and which are your grandiose energetic finishers. 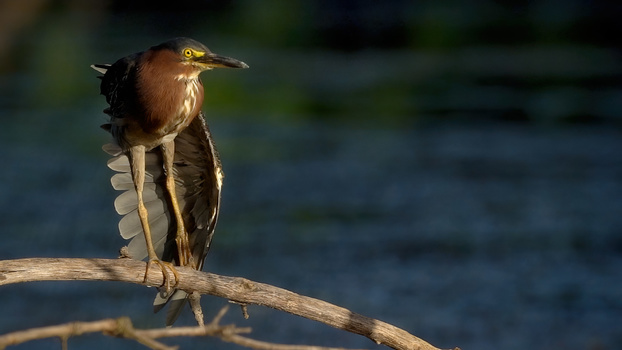 As it turned out, just because I had some cool footage didn’t mean that it could fit in with the rest of the video. From a photographer’s perspective it’s much different than nailing a great still image that would stand on its own almost anywhere it’s seen. With wildlife filmmaking, most shots will live or die in editing based on how it can relate with the surrounding video. Some green heron clips that I thought looked pretty great are sitting on the cutting room floor right now due to not flowing with the rest of the story I was trying to share. It’s tough, but necessary.

For my Green Heron video, I chose to work my story in three parts. In the introduction, I had some really cool footage of white-tailed deer at the pond that end with them walking past our first glimpse of the main character perched on a log. My thinking was that this would be an intriguing way to establish context with the green heron’s habitat and size with a little bit of build up mixed in. For the next part, I would show their elegance as well as their quirkiness and try to have the video exude their personality that makes them loved by birdwatchers in the first place. Then finally, it’s a classic predator-prey climax to show off their fierce intensity. 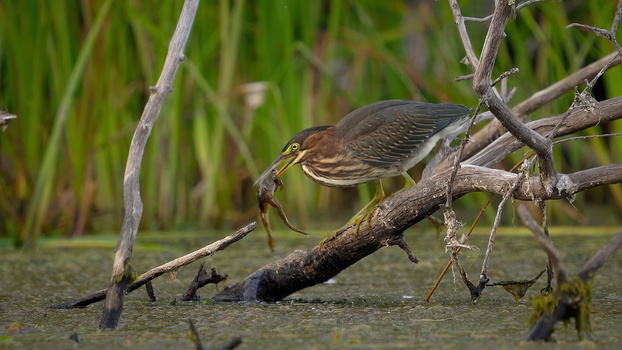 For your own wildlife videos, it will likely follow a similar path as many stories like mine do. Lead in with some way to establish the habitat that your animal lives in. Move in to giving the audience some compelling character shots to form a connection. After that add some type of action that acts as the payoff for the building momentum.

In conclusion, if you want to create a cinematic wildlife video don’t be afraid to try things out and tinker with what you already have going for you. Having watched back all my clips individually as I was in the filming process, I’m still kind of shocked how well it all worked out in the end for the final edit. Now, I’m currently filming for my next project and hopefully many more to come.