Death Row Exonerees: behind a powerful photo project on injustice

Martin Schoeller is a photographer known for his up-close portraits of the world’s biggest names – from Barack Obama to Taylor Swift and Brad Pitt – all photographed with a special halo light reflected in their eyes, capturing their personality, or even their soul.

The German photographer has now decided to aim his lens towards victims of the prison system in his current exhibition Death Row Exonerees, which is on view at Fotografiska in New York City until 10 January.

Schoeller worked with an organization called Witness to Innocence, which highlights the stories of death row exonerees, in a photo and video series. The survivors explain how they were convicted and sentenced to death for crimes they didn’t commit.

Viewers are presented with stories of innocent people who were forced to endure “government-sanctioned horror”, he says.

“These women and men bear witness to the unacceptable costs of a misguided system of laws, which are in desperate need of revision, and a prison system that focuses on punishment, rather than on rehabilitation.”

It all started in 2018, when Schoeller began researching the death penalty online. He found Witness to Innocence, contacted them, and it took off from there.

“For my personal projects, I always like to do something emotionally meaningful,” says Schoeller. “I have always felt so strongly against the death penalty, having lived in America for so many years, and it’s hard to grasp that the death penalty still exists here.” 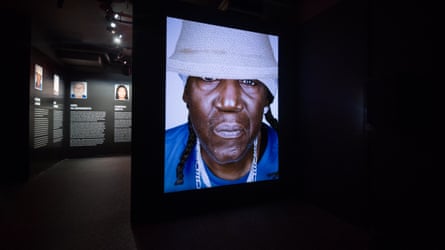 Witness to Innocence focuses on abolishing the death penalty. It works with death row survivors, many of whom share their own stories across the country to raise awareness of criminal justice reform. It’s the first time this photo series is being shown in the US.

But it wasn’t easy to gain access to the participants. When Schoeller contacted the organization’s executive director,Kirk Bloodsworth, (a death row exoneree himself), he was hesitant to collaborate for this art project.

“He saw my closeup pictures as ‘mugshots’ and was not so keen on opening the door to me, but later he was willing to meet with me,” says the photographer.

Eventually, Bloodsworth came around and saw the humanity in Schoeller’s closeup photos. Shortly after, the photographer attended Witness to Innocence’s annual meeting in Puerto Rico in 2019, where he approached the exonerees to participate in the project.

In total, he filmed, photographed and interviewed 15 exonerees over the course of four days in a hotel room in Puerto Rico, which was chosen as a location for having abolished the death penalty in 1929. Ten are featured on view at Fotografiska.

“Nobody has been [judicially] killed in almost 100 years in Puerto Rico, but half of American states have the death penalty,” says Schoeller. “It’s hard to understand how someone could be sentenced to die and them sitting in a death row cell for years, sometimes decades, with an execution looming over their head.”

The interviews with the exonerees were not your typical, journalistic Q&As. They were more like informal conversations. “I talked with them without a running video camera because people open up more that way,” says Schoeller. “Who wants to see another video of talking heads anyway? I decided to film them in a closeup style.”

Over the course of four days, Schoeller spent hours interviewing them and having drinks and dinner with the exonerees. “I hung out with them for days and really got to know them,” he says. 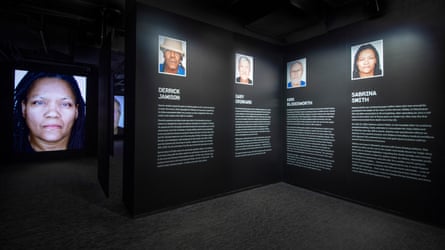 When the works showed at the NRW-Forum in Düsseldorf, gallery-goers could sit down and watch the films. Here at Fotografiska in New York, it’s a more intimate experience. “With every room you walk into, you meet a new person,” says Schoeller.

The series strikes a markedly different tone than his trademark celebrity portraits of George Clooney, Rihanna and Angela Merkel. “With famous people I usually have 10 minutes and there’s no conversation, it’s a different experience,” he says. “I enjoy this work a lot more. It’s closer to my heart and I get to make friends and meet people who have incredible stories to tell.”

With the gallery walls painted black and dramatic lighting, it’s symbolic of death row. “I always felt like a death row cell is kind of like being buried alive,” he says. “But seeing big faces feels intimate. I wanted to create a new experience that speaks to people on an emotional level. It illuminates what an exoneree’s experience was like being on death row.”

This experience is what the photographer aims to depict: the feeling of discomfort. “It makes you uneasy,” he says.

Among the exonerees that Schoeller worked with for the exhibition, there is Derrick Jamison, who spent 20 years in prison for a murder and robbery he didn’t commit.

“There is a double standard when it comes to justice in our judicial system, especially with wrongful conviction,” says Jamison. “If you are a minority or a low-income citizen, the pursuit of justice can be an elusive one. But if you are rich, it happens overnight.”

He also worked with Kwame Ajamu, who was sentenced to death in 1975 for the murder and robbery of a salesman, due to a false eyewitness testimony and police misconduct. He was released from prison in 2003, after serving 28 years. 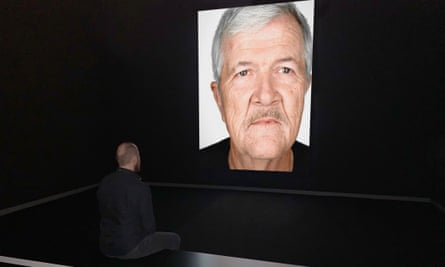 “Kwame thinks within the next five years, the death penalty will be abolished,” says Schoeller. “Many people think it doesn’t make any sense and more politicians are realizing that.”

Schoeller also shot Sabrina Butler-Smith, the only woman in the series. She was convicted in 1990 for the death of her baby son Walter, due to false forensic evidence from a medical examiner. She spent five years in jail. She is only one of two women ever exonerated from death row in the US.

“Based on that one medical examiner’s testimony, she was sentenced to die,” says Schoeller. “It’s amazing how one doctor can decide between life or death.”

It was a heavy experience to listen to the exonerees share their stories. “I started to cry when I was talking to them, they cried, too,” says Schoeller. “It’s hard to see grown men and women who have spent 28 years in prison start crying. It was heavy, I’ve got to tell you.”

To Schoeller, it’s more than just abolishing death row in America. Each exoneree had a profound story to tell, wisdom to learn from.

“These survivors have a strong will to live. It comes with a lot of joy, they’re positive people. They’ve overcome tremendous hurdles to be here. For the most part, they’re not bitter or angry, which is still hard to fathom.”

He adds: “There’s a lot to be learned from these people; to be able to forgive and have mercy. To look for the better and not dwell on the bad.”