Anyone who’s shot Comet NEOWISE has noticed one thing: it looks a bit small in the frame when shooting on wider lenses. That’s why with the help of some image editing, creating a composite where we replace the sky may be the best way to produce a stunning comet composite.

The scene in front of you is impressive, but wide, and the only way to fit it all in is to use a mid to wide-angle lens, but Comet NEOWISE now looks comparatively tiny in the frame. Or perhaps you’ve got a great night-time landscape shot, but no comet because of cloud cover. The easiest way to get Comet NEOWISE looking big and impressive, whilst retaining all that glorious vista, is to make a composite image. 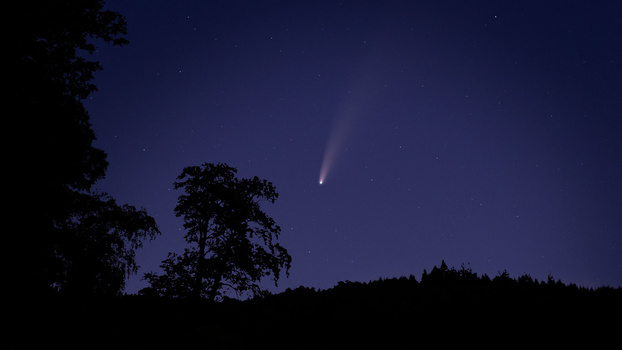 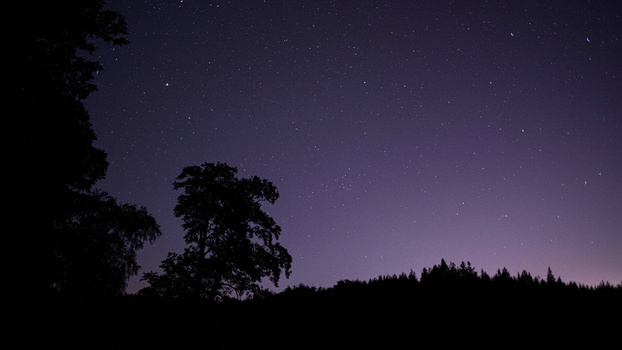 By taking two shots: one using a long focal length lens to zoom in on the comet and capture it filling the frame; and then another shot capturing the landscape on a wider lens, we’re going to overlay the close-up comet photo into the landscape scene by replacing the sky.
I’ll be doing this in Photoshop CC, but other image editing software such as Affinity Photo, or Photoshop Elements, work similarly. 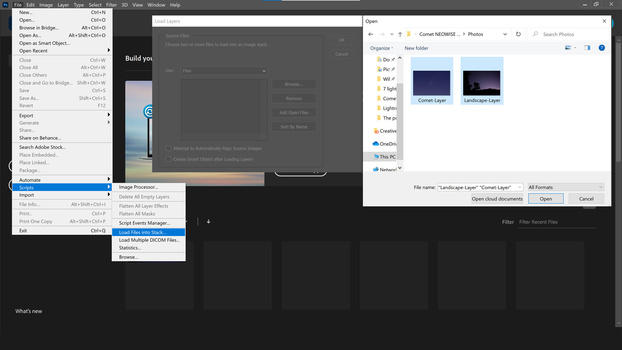 Open your images into one Photoshop document by heading to File>Scripts>Load Files into Stack and select your two photos then click Open. Place the comet layer at the bottom of the layers palette, with the landscape layer on top. 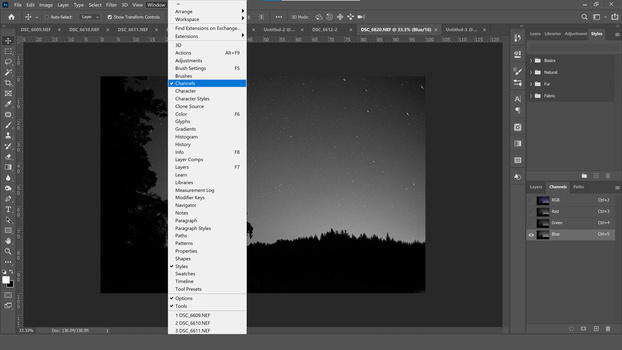 Open up the Channels window next to the Layers palette (or go to Window>Channels) and select the Blue color channel. This channel has most data for the blueish night sky and it’s where we’ll be making our selection of the sky, in order to remove it. But first we need to make the scene as contrasted as possible so the sky is bright white, and the landscape is dark black. 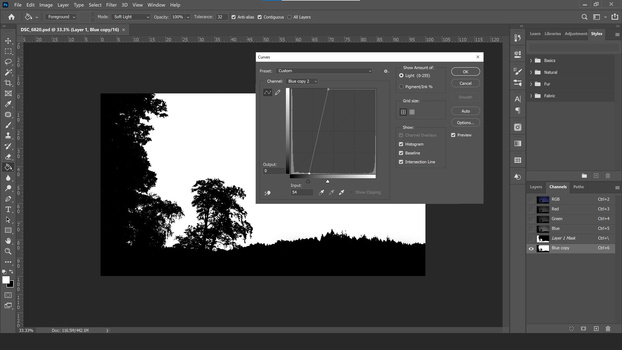 Right-click on the Blue channel and click Duplicate. Hide the original Blue channel layer by ticking the eye icon, and reveal the new Blue copy layer beneath by clicking the same button. With the Blue copy channel layer selected open Curves (Image>Adjustments>Curves) and drag the top anchor handle across from top-right to top-left, and the bottom anchor handle towards the bottom-right until the scene looks like this. 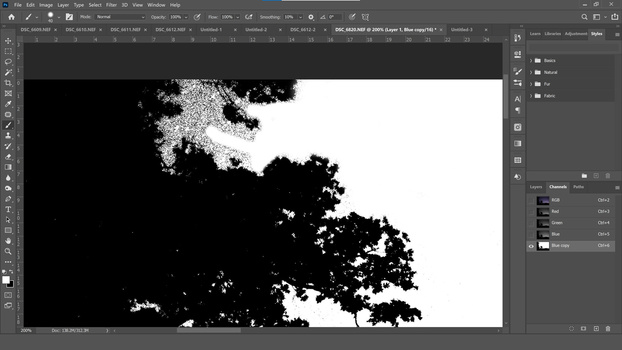 If there are any spots left in the black landscape, or white sky simply use the Brush tool (B) to paint black, or white respectively over the areas until there are no longer any spots. Press D on the keyboard to revert your foreground and background colors to black, and white, then press X to swap the colors over while painting. 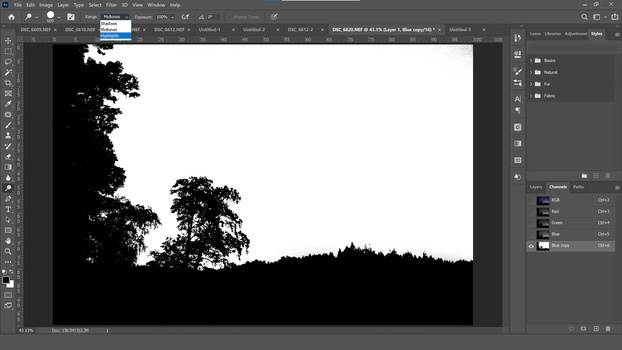 For those in between patches of complex sky-land areas, (think between leaves on trees etc) use the Dodge and Burn tools to increase contrast. Set the Dodge tool to Highlights from the Range drop-down menu at the top of the window, and select Shadows for the Burn tool. Make sure Exposure is set to around 65%. 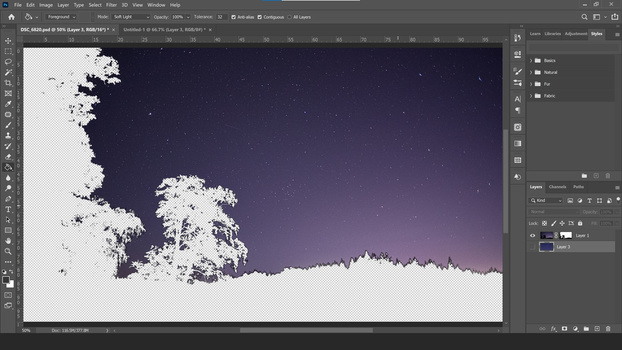 Now, with the Blue copy channel still selected, hold Ctrl (CMD for Mac users) and left-click on the layer to select the sky you’ve just edited. Select the RGB Channel layer again to reveal all the colors, and head back to the Layers palette then click the Add Vector Mask button at the bottom of the Layers palette. Then you’ll need to invert the selection by pressing Ctrl + I (CMD + I on a Mac). 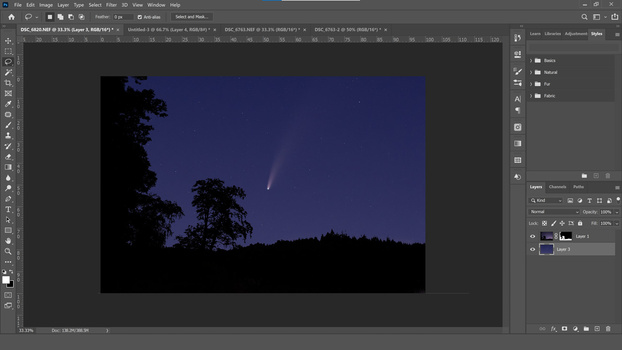 Now move the comet photo layer to the bottom of the layers palette (if it isn’t already) and reposition it so the comet is clearly visible and not hidden by foreground. You can scale up this layer so that the comet appears larger or smaller against the foreground by using the Move tool (V) and adjusting the anchor points around the edge of the photo. 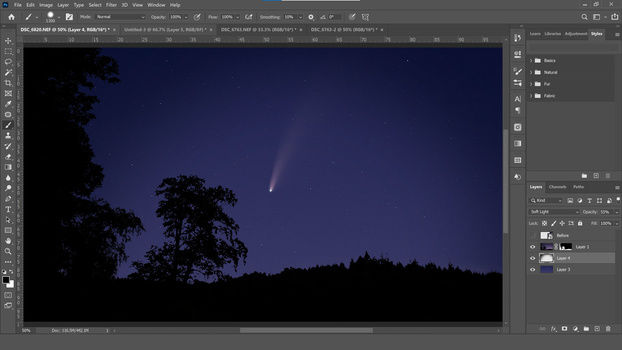 Finally, you can make any other adjustments you want, like adding a vignette or adding sharpening to the comet layer to make it pop. Here I’ve added a black vignette around the edges of the frame, and inserted the layer in between the comet photo and the foreground photo to mimic the glow you’d get from nearby towns or a recent sunset.

And you’re done. The sky is replaced and the comet now appears huge in the sky behind your foreground. I’ve made quite a quick selection here for demonstration purposes, but even so it’s still much more accurate than it would have been painting a mask over the original photo, and almost impossible to get in between all those tiny gaps between the leaves. Spend a bit more time on it and it’ll be absolutely perfect.

This is an artistic way to combine two separate shots, one of your notable foreground and the other of the comet itself. I’m sure a few will think of this as “cheating,” but it really isn’t. Photography is as much an artistic process as it is a scientific one, so who cares whether you’re dropping a sky in, what matters is the end result and whether you’re happy with it or not.

Hopefully that helps some out there that just haven’t had the opportunity to place a good foreground in front of Comet NEOWISE, and judging by its trajectory it’s soon to be gone for 6800 years, so I think this composite technique is extremely helpful for those that want to use their close-up comet shots to the fullest.