‘I was a blackout drinker, and over the years my blackouts became longer and more adventurous,” says Scott Lavene. “I went out in Edinburgh once and woke up in Cambridge with GBP500 that definitely was not mine.” He’s sitting in a caravan with a cup of tea, explaining why he has the word “stray” tattooed on his shoulder.

The dictionary definition of stray is an animal without a home, he says, and that was what his drinking made him. Now a musician and performer, with a record label supporting him, Lavene has also co-created the first film put together by the Outsiders Project, a writing and performing collective of people who, like him, have hauled themselves out of lives of addiction, crime and exploitation. 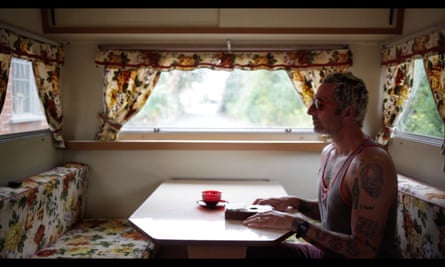 The 16-minute video is part of a project about the autobiography of tattoos, which was just getting under way when the Covid-19 outbreak began. The aim was to create a play based on the stories people told about the artworks they had inked into their bodies. People like Gail, whose arm bears a tattooed floral necklace strung together by the names of her four children, who were taken into care; and Jane, whose butterflies recall both the miraculous flutterings of pregnancy and the dark enchantment of addiction. (“The first time I put a crack pipe in my mouth, the butterflies danced in my mind.”)

The Outsiders Project is based in a disused department store in Boscombe, a suburb of Bournemouth, where most of the outsiders had originally gone to check into one of its many rehab centres. But ambitions for the show – the project’s third – are anything but parochial. By the time lockdown brought their ambitions crashing down, they had Theatre Royal Plymouth, Hampstead theatre in London and Cornwall’s Kneehigh theatre lined up as creative partners.

Instead of giving up, the Outsiders did what ex-addicts know how to do better than anyone: they picked themselves up, dusted themselves off – and decided to go global. Within two days, a website had been set up to gather testimonies from anyone with a story to tell. It now features more than 60 stories from as far afield as New Zealand, with more coming in by the day.

Some stories are submitted in writing and others are collected from oral accounts. If necessary, they are translated, and the process always involves collaborative editing rather than rewriting, explains founder Nell Leyshon. “The whole point is that these are unheard voices.” 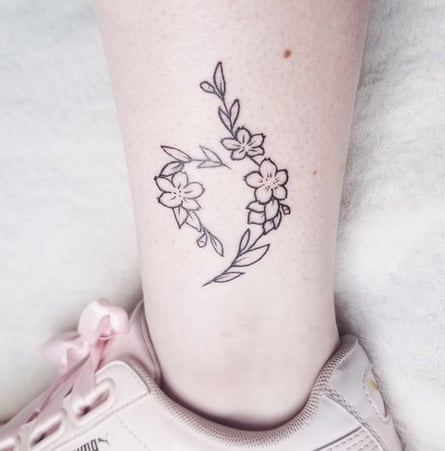 Leyshon is playwright and director, who was inspired to set up the Outsiders Project by the people she met while running creative writing workshops in Boscombe. Much to her surprise, she found she had her own story to tell. “When I started the tattoo project, people kept asking when I was going to get a tattoo. I laughed and said never,” she says. “But yesterday I remembered I do have three tattoos. They are tiny black dots used to line up the radiotherapy machine.”

The tattoo’s role as a memorial of illness – in Leyshon’s case, breast cancer – is a recurring theme. American participant Leah chose a posy of flowers to mark her recovery from anorexia; the bright orange ribbon of Debbie’s “survivor” tattoo speaks of a childhood lost, of “blood and bandages, confusion and chaos … They said I would live for six months. I was 10 years old.”

The tattoo also has a historic place in folk culture. “Two swallows on the inside of my thighs. Facing each other,” writes a second man called Scott. “Sailors used to get them when they’d go on ships hundreds of years ago. They believed that if you were out at sea and drowned, swallows would carry your soul up to heaven.” Ben, meanwhile, inked himself with a replica of a portrait worn by his father, who spent his youth in the French Foreign Legion, evoking a history of troubled young men forever marked as renegades. “At first, he told me don’t get this tattoo because people are going to think you’re a legionnaire and it can bring you trouble.”

The subject of transformation is common, with images marking a recovery from, or a reconciliation with, death or disease

Though most of the stories tell of trauma, they also showcase the wit and resilience of the survivor. New Zealander Jimmy has the name “Cazale” on his arm in memory of the Hollywood actor John Cazale, who died after making five Oscar-nominated films, including The Godfather Part II and The Deer Hunter. It is a tribute to someone whom nobody really remembers, he writes. But it’s not just a name. “It’s a whole set of values, memories, ambitions, aspirations.”

The subject of transformation makes a frequent appearance, whether in images marking a recovery from, or a reconciliation with, death or disease, or in the physical act of inking over a shoddy design, a bad memory, with a better one. In these hands, tattooing is an optimistic art form, in which the body mirrors the mind as a work in progress.

Sometimes the stories are mini operas which, in Beckettian style, have you laughing wildly amid severest woe. And none more so than Beth’s bittersweet account of the Chinese symbol she had inked into her body, paid for with her rubbish wages from a dead-end job, believing that it meant “strength”. Years later, she writes, she was cleaning up with a Chinese fellow sex worker. “As we showered together after the client had gone, she looked at my tattoo and laughed. She said, ‘Why do you have little donkey written on your belly?'”

VIDEO: Pandemic Portraits: An Intimate Look at the Age of Social Distancing

Twitter Will End Political Ads On Its Social Media Platform