Canon has posted an update concerning a recent issue with its image.canon cloud service. Canon has confirmed that some of the photo and video image files saved to its cloud service were lost.

The service was shut down on July 30, 2020, when an issue involving the 10 GB long-term storage on image.canon was discovered. After resolving the issue on August 4, 2020, the service was resumed.

I use cloud services, but I always use them as an additional resource and not as a primary storage means. A “cloud service” is not anything special; it’s merely someone else’s computer (server), and hardware and software malfunctions can and do still occur.

Cloud services can be a convenient way to transfer images to other people or get them to your editing device. However, these services should not be used as a single storage means to free up space on a memory card. Files can be corrupted during transfer and/or lost, as we have seen in this recent image.canon issue.

Here is a screenshot of the notice as of the writing of this article: 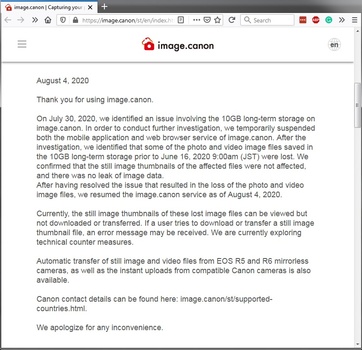 My personal practice is that I do not format my memory card until I have transferred my images to at least two separate drives. One of those drives immediately syncs to my Dropbox account, which then syncs to a third drive on a different computer. By the time I format the card, the images are in four locations, one being a cloud service in case my house burns down.

What Can Camera Manufacturers Do to Attract Smartphone Users?