Can Lens Sales Bring Salvation to a Desperate Camera Market and Help Save Nikon?

Stop making these mistakes when shooting with a wide-angle lens

Natural Light vs. Strobe on Location Challenge | Inside Fashion and Beauty Photography with Lindsay

The news headlines have been rampant for the last 10 years: the camera industry is in free fall, spiraling into its death as a consumer electronics niche, no longer the doyen of conspicuous spenders around the globe. The numbers speak for themselves, peaking at camera sales of 120M units in 2010 before imploding to a grisly 15M in 2019. And that was before the definitive stab wound to the heart of COVID-19. Could it be that the humble interchangeable lens is the industry’s salvation?

To understand the situation that camera manufacturers now find themselves in we need to recap where the digital camera has come from. CIPA shipment data is invaluable as it goes back to 1999, when digital camera production really ramped up. The graphic below is the one we are used to seeing, plotting millions of cameras shipped by manufacturers. Production peaked in 2010 at 120M units and has been in free fall since reaching a low in 2019 at 14.9M which is only higher than 1999 and 2000. 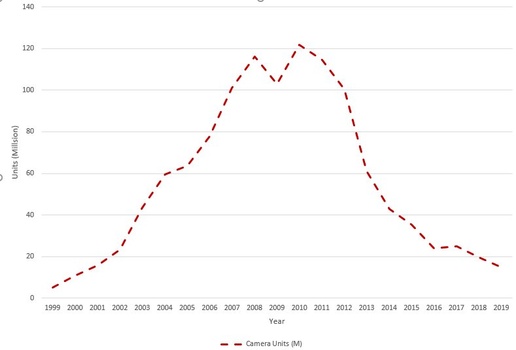 It’s understandable why manufacturers are struggling when they are making and selling dramatically fewer cameras. However the picture is a little more nuanced than this. If we add in the value of shipments in Billion Yen (roughly 100 Yen to the U.S. dollar) we see a similar picture, although bear in mind these figures are not adjusted for inflation. Note that the monetary value of shipments peaked in 2008 and then rapidly declined suggesting that the bulk of cameras were both low in value and had low margins. It seems we are now back to a position of lower volume sales of higher value and margin. It would also seem that when manufacturers developed the plethora of new mirrorless models from 2010 onwards, they knew income was rapidly declining but probably not how bad it would get. 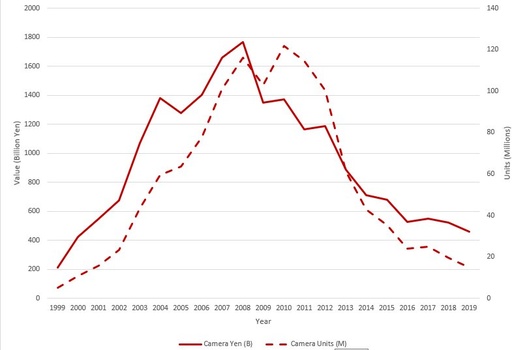 However the photography market is much more than just cameras, with camera manufacturers invested in producing both bodies and lenses. In fact, for every one ILC, multiple lenses will be purchased which makes repeat sales potentially very valuable, whilst the specialist nature of development and production also means that there is scope for high end positioning and good margins. It’s this sector that Zeiss and Leica have occupied, and the likes of Canon, Nikon, and Sony are trying to push in to. However we also see Sigma and Tamron rapidly innovating in this space. Understanding the scope of the sector is crucial to appreciating its importance and this is something that CIPA also report upon. The chart below adds shipments and value for lenses indicating that no where near as many units ship (compared to cameras) and they aren’t worth as much.

That said there are some critical points to take away from this picture. Firstly, as camera shipments rose rapidly, lens shipments only gradually increased. This reflects the dramatic increase in compact camera sales. Secondly, production peaked in 2013 and has declined since then, but nowhere near is rapidly as cameras. Whilst the latter has seen an average 22% annual drop in shipments since 2012, average annual lens shipments have only dropped 7%. Thirdly, the relative value of lens shipments to the combined camera-lens market has increased from a low point of 6% in 2003 to 34% in 2019. In short, lenses are a critical source of income and profit. 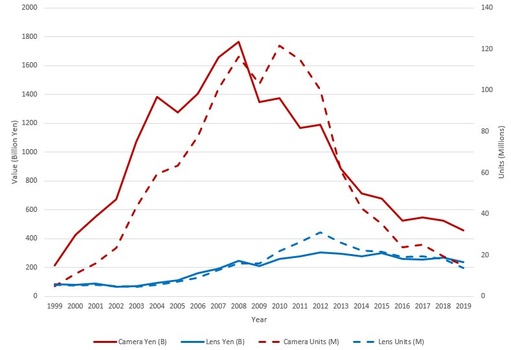 The importance of lens sales goes further than is at first apparent when you realize that in 2019 some 17M lenses were shipped on the back of 8.2M ILC sales, a ratio of two lenses for every one camera body. With the severe impact of COVID-19 on manufacturers’ bottom line, it’s interesting to see they are faring slightly better: camera shipments declined 51% whilst lens shipments dropped 46%.

It should be apparent from the above that lens sales are now making up a significant proportion of camera manufacturers’ income and so are an important source of revenue. The graph above also shows how relatively insensitive to the camera market lens shipments are; the curve is relatively flat. This highlights a key property of lens sales: customers regularly buy lenses. So whilst lenses are long-lived, with photographers replacing older camera bodies, they also like to build lens collections.

The current shift to mirrorless is an historically strange moment in the industry. We have long-serving camera mounts which manufacturers have stayed loyal to — F, EF, and K mounts are all good examples — and some of these are potentially in the process of being retired by their proponents. The introduction of mirrorless from 2009 saw new mounts introduced in parallel with those on DSLRs; they were never meant to replace them. The pivot to mirrorless by Sony, Nikon, and Canon represents a watershed moment where the DSLR has wholesale been relegated to a has-been. The speed with which Nikon and Canon have had to act is unprecedented, requiring the development of a new mount and then the ground up design and production of new camera bodies. The most complex aspect has been rebuilding and scaling the production of their lens lineups.

This doesn’t mean the DSLR is dead, but 2020 could be the year that MILCs outsell them. I would expect to see DSLR offerings to become vanishingly small in the coming years. In the same way that Nikon still offers the film F6, maybe we will see a revised lineup of only the D850 and D6. The legacy of DSLR users means matching lenses will sell in significant quantities but development could stop, with the technical innovation shifting to mirrorless. In fact, this is something we are already seeing from all the main players. Quite where Pentax fits in to this new landscape remains to be seen given their stated ambition of remaining — err — mirrorless-less!

So how might this help Nikon as, like cameras, their lens sales also show a declining market share? This situation isn’t simply the result of fierce competition, although that is certainly a factor. Their product lineup is undergoing a transformation as they pivot to mirrorless and this has caused sales to stutter on the DSLR front as they race to release a full mirrorless lineup. This is against a backdrop of the massive decline in compact camera sales, a key source of revenue for them. In short, they need to fill out their mirrorless camera range and, crucially, the range of lenses on offer. Clearly you want to demonstrate the capability of your system and targeting pros is the traditional starting point. However there is a key revenue stream in selling second-tier APS-C models to amateurs, along with a range of lenses to support them. This doesn’t happen overnight, but the sooner Nikon is able to to offer a wider range of optics the more resilient it’s income will become. People want to buy lenses and sales are less susceptible to market ups-and-downs.

A word of warning: third-party sellers. These have long existed with Tamron and Sigma good examples. Their products have significantly improved to the point that some offerings are now preferred to own-brand models, however there is a reason for this: South Korean and Chinese models are eating away at the bottom of the market. In fact, not just at the bottom but well in to the middle segment. Samyang, for example, started out with well-specified manual focus models but is now shifting into the AF sector. Expect that 20% market share to grow, putting further pressure on Japanese manufacturers.

Lead image a composite courtesy of geralt via Pixabay, used under Creative Commons.