A fine art wildlife photographer has just taken what he considers to be potentially his best image yet, managing to catch a huge great white shark leaping some 12 feet into the air.

Chris Fallows was at Seal Island in his native South Africa shooting for Discovery Channel when he made the remarkable capture. He was being filmed for an Air Jaws special for Shark Week at the time, specifically for an episode in which shark experts attempted to photograph the best breach.

All of the experts approached the task using different techniques. While one opted for a drone, another decided to shoot the photo at night. Fallows opted for a tow camera. He recalls: 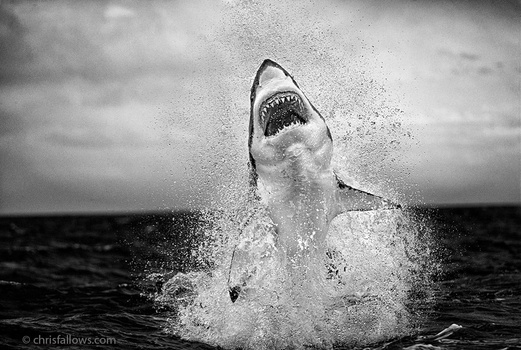 Chris got some unbelievable breaches. In fact, one of the breaches is probably the best he’s ever filmed. More than any other Air Jaws we’ve done, this one has a really strong conservation message: We have to do something to protect these great white sharks because they are on the brink of annihilation.

If you like this work, you can see some of the 9,500 predatory events he’s captured of sharks in his time as a photographer over at his website. You can also find him on Facebook and Instagram.

Images courtesy and used with permission of Chris Fallows.

The New Frontier of Wildlife Photography

What Shot Is Your Photography White Whale?