Have you ever seen someone’s work and been not only blown away by the technical ability of the photographs, but how it emotionally moves you as well? In this article, take a look at the inspiring work and message behind photographer, Russ Watkins new series, Black and White:Perception vs. Reality.

How I Found Out About the Project

Amidst the civil unrest that was happening in the country, I tried to process everything that was going on and decided that I needed to take action and do my part. I just wasn’t sure how. So, one day, as I was scrolling through Instagram and looking at the work of some of the photographers that I was following in my local area, one of them linked to Russ’s page. Based off of the first image that I saw, I was instantly hooked, and knew I had to be a part of it.

I reached out to Russ a few minutes later, and we started talking about his project and hearing the goals he had for it. Since he was based locally, I offered to put together a behind the scenes video, showcasing the new project and the powerful message behind it. So, after some back and forward logistical planning, the kinks were worked out and the shoot day was confirmed.

As I was piecing together the video, I realized that, as photographers, before we start any passion project, it is important that we first establish our voice and find out what makes our buttons tick. If we don’t have a clear vision of what we want our work to say, it is easy to miss a crucial connection with our audience.

It is safe to say, when I finished editing this video, I was inspired to not only become a better photographer, but be a better and more understanding person.

A Little Bit About Russ

Before I dive into his thought process and insights behind the work, I’ll make a brief introduction. Russ Watkins is a conceptual portrait artist, mainly working in the Orlando area. His work expresses the beauty of humanity, and exposes us to the truth and stories behind the people we interact with on a daily basis.

While the message of the project and initiative is thoughtful, what drew me to the work was the way in which black voices would be uplifted. Russ explains that “the project is named Black and White: Perception Vs. Reality and it’s because of the sense that through this project, it aims to highlight that the perception we have of someone, is most often not the reality.” This notion is depicted in the final set of images. In his technique, Russ juxtaposes an image of how someone may feel they are perceived in society compared to who they see themselves to be. Seeing these two images side by side highlights Russ’s ability to capture not only the perception, but also the reality. This is the essence of portrait photography: exposing the stories and truths behind people, and harnessing the power of photography to uplift and empower them.

How the Project Came to Light

As for most personal projects, there is a hefty amount of planning and thought that goes into making an idea turn into a reality. From the pre-production and coordination of the shoots to how the scene will be lit and then photographed, to the post production where the final shots are pieced together. Russ explains that he started the project because:

Knowing he is part of a movement, not a moment, he wanted to ensure that while the protests of today may not continue forever, his photos will.

After weeks of planning, the shoots were booked, the vision was fleshed out, and shoot day came. For setup, Russ explains that he first “sets up a black background with dramatic lighting, which mirrors the perception that so many people have of them” but adds that “the flip side to that, is photographing them on a white background, where he is able to capture a portrait where the subject is truly themselves.”

With any project, it all comes down to the proper equipment and tools for the job, but it’s important to note that before firing your shutter, you should have an idea of how you’ll compose, light, and expose the shot before the model arrives. Listed below is a gear breakdown of all the equipment he used to make his vision a reality.

How He Connected with His Subjects

In order to carry out a project of this nature, which is so much built around the vulnerability of the person he is photographing, it is imperative that Russ builds a genuine and sincere connection with them. This connection and sense of trust to be able to accurately tell their stories. When you look at the collection of images in the series, they tell a story of powerful and raw emotion. The intimate connection between the photographer and the people he’s photographing is strikingly evident in all of the portraits.

After speaking with Russ, I was interested in what this process looked like and how it helped him capture something candid yet powerful. He explained to me that:

The first 10-15 minutes of the shoot is expected to be informal and really getting to know one another. Sharing stories, and connecting as people. This also allows time for the subject to ease their anxiety (if they have any) and get used to the camera, strobes firing, etc. 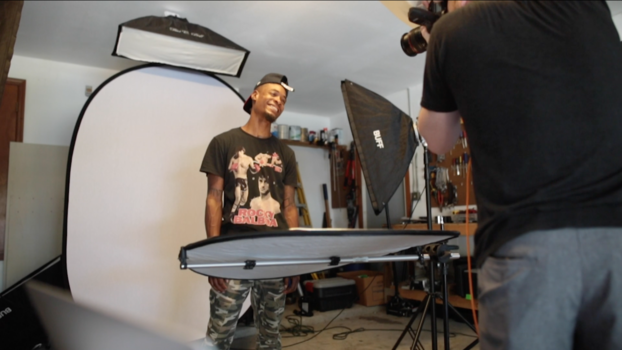 After being on set with Russ for a few hours and seeing him in his element, the most inspiring thing I found about his process, was not just in his technical ability to capture great light, but also the way that he carried himself as a person and connected with his subjects. He did not just randomly fire the shutter, but rather spent the 30 minute session moving quickly from stranger to friend.

From the time the person he is photographing walked into the makeshift studio, they were greeted by a warm smile, and throughout the shoot, we all got to know each other a little. What their dreams are, their background, and who they really are without the labels and perception that society prescribes them. He shared the photos with the participants after taking them as a way to enable them, to share their stories and their realities. He has shared the images along with their stories on Instagram using the hashtag #perceptionvsreality.

Through this project, he used the power of photography and social media to create something others would have to help share their story, tell their narrative, and change reality. 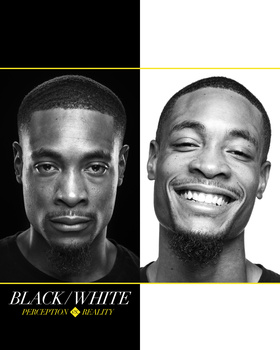 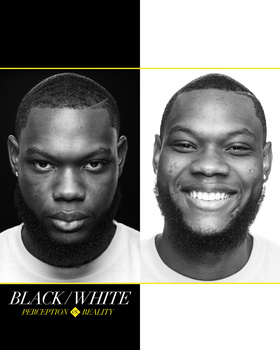 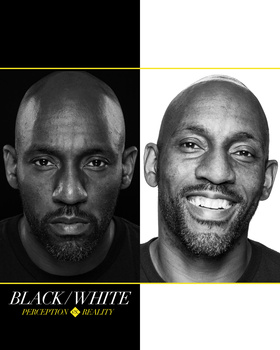 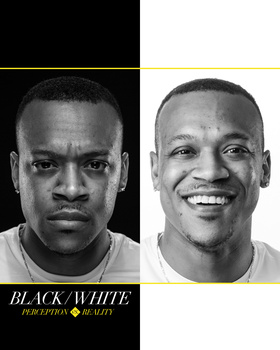 When you’ve invested yourself and everything you have into a project, by the end of it (if there is an end) a lot of times, you walk away a changed person. The project that you choose to pursue, will inevitably reflect on how you see the world and yourself as a person. But, in this project, the impact was made on more than just him, it was made for his participants, and audience.

This is what one of the participants, Darien had to say about it:

I saw this man’s vision from his post here on Instagram and knew instantly that it was something I wanted to be a part of. What I appreciate most is that he sees the way society view most men of color without actually knowing who we are personally and used his platform to bring awareness. The fact that he may not have ever experienced social injustice or racism and still chooses to not remain oblivious and instead embraces the issue to help says a lot about his character and who he is as a person.

If you were inspired by this project, and would like to be involved, head on over to Russ’s Instagram and reach out. While you’re there, be sure to check out the final images, alongside the stories of each person he photographs, which are released on an ongoing daily basis.

If you’re thinking about making your vision a reality, and starting on that personal project you always wanted to do, take the next step and start it today! You have the ability to change the world through your images and use your voice to change how the world thinks. It’s waiting to listen. What are some personal projects you have done and how have they impacted you? Share your stories in the comments below!

All images used with permission of Russ Watkins.

Cover All Bases In Photography, Part 1