When Is Your Camera Likely to Fail and What Can the Soviet T34 Tank Tell You About It?

As a working pro, dedicated amateur, or just plain photographer, the last thing you want is a dead camera, especially when it’s through no fault of your own. Failures are part and parcel of the working life of a camera, however, what can the the Soviet T34 tell us about this?

Any mechanical or electronic system will fail at some point. That is the nature of designing and manufacturing products that perform multi-faceted and involved tasks. When the number of parts, and so manufacturing processes, increases — necessitating a multi-stage production line — then the potential for the product to fail also increases.

Tank production during World War 2 is a good proxy to understanding complex mechanical systems. By the end of the war, production looked like this: U.K. (36,000), Germany (47,000), U.S.A. (102,000), and Russia (106,000). What is remarkable is that the Soviets had little money, a moderate labor pool, and relatively little coal and steel. In stark contrast the U.S.A. had a significantly higher GDP, a large labor pool, and lots of coal and steel. In between, Germany was wealthy, with a relatively smaller labor force, but reasonable quantities of coal and steel. How then did Russia miraculously manage to produce so many tanks?

The answer lies in what was a modern approach to manufacturing: targeting a design life and ruthless cost reduction. The Soviets looked at the lifespan of a tank on the eastern front and discovered it was 6 months, which reduced to just 14 hours in combat. In short, any design that extended its utility beyond these limits was an over-design. This became their target lifespan and as a result the engine was designed to last just 1,500 km; to lower costs they opted to select simpler designs, cheaper materials, and innovative production. In fact, the T34 was subsequently reduced to just 5,461 parts, with the cost of production halving from 1941 to 1943. “Money is time” — the Soviets flipped this saying on its head and managed to reduce production to about 40,000 hours.

In contrast, Germany designed and produced a high quality tank. Rather than opting for a rolling production line, it was built in-situ (station based.) Whilst the Soviets’ had a total of 3 tank designs, the Nazis had 14 variants for the Panzer 3 alone. Not only that, they liked tinkering, with the Henschel factory introducing 250 modifications to the design over a 2 year period. As a result of this, the Panzer 3 took some 300,000 hours to produce! By way of comparison, the U.S.A. fully embraced production line assembly, with a large and well organized workflow that reduced the time to produce a Sherman to just 10,000 hours!

When products get small, utilize a range of different manufacturing materials, have a large number of parts, and incorporate micro-electronics, then the complexity significantly increases with greater potential for failure. Cameras epitomize all of these elements in bucket loads and end up being used in harsh and stressful environmental conditions, yet photographers — fairly or unfairly — expect zero down time. The T34 had a design life of just 6 months and production was oriented around this, although the actual failure rate is unknown. The starting point to understanding camera failure is termed “Mean Time Between Failure” or MTBF.

At its simplest, this describes the amount of time you can expect before a product fails, at which point it needs repairing. Taking a fairly simple example — a bicycle — how many riding hours would it take before there was a fault that needed repairing? The most likely scenario is a puncture, but as time goes on you have the added complexity of other components failing such as brake blocks wearing, cabling snapping, or chains breaking. That is why you have a servicing schedule and the MTBF is designed to reflect, for a serviced system, the expected longevity to failure.

When you design a product you might well have an MTBF you are targeting, but the actual value can only be calculated from known errors that are reported and these are generally not released by the manufacturer. One exception, however, are often vehicle safety tests; in the U.K. all tests are in the public domain which means you can compile a list of which vehicles failed and why, although that doesn’t necessarily equate to MTBF for a well serviced vehicle.

This highlights that for complex systems comprised of different components, the product is only as reliable as the weakest component. In cameras, that may well be the shutter as it is both a high precision and high use component. The additional likelihood of failure of other components adds to this, but are generally much lower. In fact, manufacturers do change the shutter design for a target market. Nikon’s D6 is “tested to 400,000 actuations”, whilst the D3500 is down at around 50,000.

It also highlights that a product return doesn’t necessarily mean a product failure for two reasons. Firstly, it you damage the camera then whilst that may be a fault it is externally attributed, rather than an intrinsic failure. Secondly, a component may fail that isn’t a requirement for the operation of the camera. If the rubber on the handgrip detaches or LCD screen stops working, whilst the latter is more serious you can still use the camera. It’s also worth remembering that where you have a product that isn’t repairable it’s called the Mean Time to Failure (MTTF), at which point you through it away; memory cards are a good example of this. 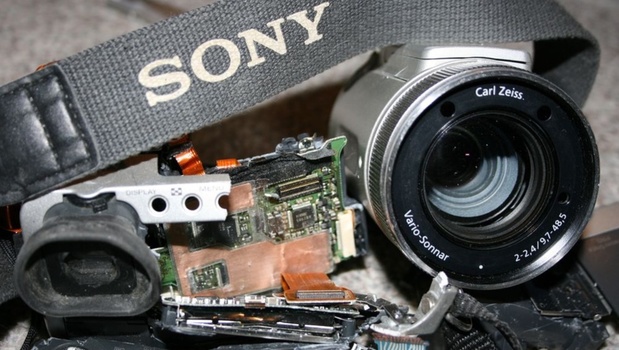 As a working pro you want a camera to be usable whenever you need it, although downtime may well mean that you have windows of opportunity for servicing or repair as necessary. What you don’t want is failure on a job, which is obviously the reason you carry a backup camera (and battery, memory card, flash etc). However you largely base your choice of camera on it being “pro spec” in some form, as well as which camera system you shoot. In short, you don’t know how reliable a camera or lens is, rather buying it because you shoot Nikon or Canon and need that product.

Manufacturers obviously do have an understanding of the failure rate of their products and these sometimes lead to a product recall. Nikon had oil spotting on the D600, as well a faulty shutter mechanism on the D750, whilst Apple was infamous for antennagate. Perhaps the biggest potential source of advice is from large independent repair centers. For example, LensRentals has reported on “weeks to repair” for their sample of 12,000 lenses representing 2,000 repairs, however bear in mind this is for heavy and hard use reflecting expected failure as well as damage inflicted. End users would expect a much longer serviceable life. You can also get an idea of shutter life at the Shutter Life Expectancy Database where end users enter the number of actuations for their current camera; for popular cameras this can give you a really good idea of failure rates, although it also shows most photographers don’t shoot many photos!

This highlights the importance of servicing for heavily used equipment. For cameras, the shutter count can give you an indication of use, but it won’t tell you how many flights the camera took, how many times it was thrown in to the back of a car, or how many shoots were on a beach. All it is is a proxy. Perhaps a better marker is who you buy it off, although if it’s from a used store you won’t know that.

All of which brings us back to the T34. It had a design life of some 6 months or 1,500 km, which was intended to maximize production for the intended use (time is money!). In the commercial world, the decision is to build to a specific budget and, like the Soviets, a manufacturer will look to simplify, select cheaper components, and lower production costs. If you can do that, whilst maintaining MTBF, then you have a winning design.