The Powerful Tool for Improvement That Most Photographers Don’t Use

There are many ways to improve as a photographer, but not all ways are created equally. One of the most effective and well-documented methods for improving at any skill is also one not undertaken by most photographers.

I have a personality trait that is generally negative, but occasionally useful: I get obsessed with things. When something interests me, I can’t help myself from going down the rabbit hole and consuming as much information on the subject as I can obtain. When I picked up my first camera, photography was far from any different. In fact, it might have been one of the strongest examples of it. I spent every free second taking pictures, reading articles, viewing other photographers’ work, watching videos, buying documentaries, and so on. One specific element of this rampage for information was highly effective, and quite by accident, something I would later learn the name of and how to employ it properly.

I used to attempt to recreate styles of images. That isn’t to say I wanted to mimic an image, but rather I wanted to create my own shot but using a style I had seen and enjoyed. This usually pertained to lighting or post-production. One example of this I remember came a few years after I’d started taking photographs, and it was portraits by Lee Jeffries. 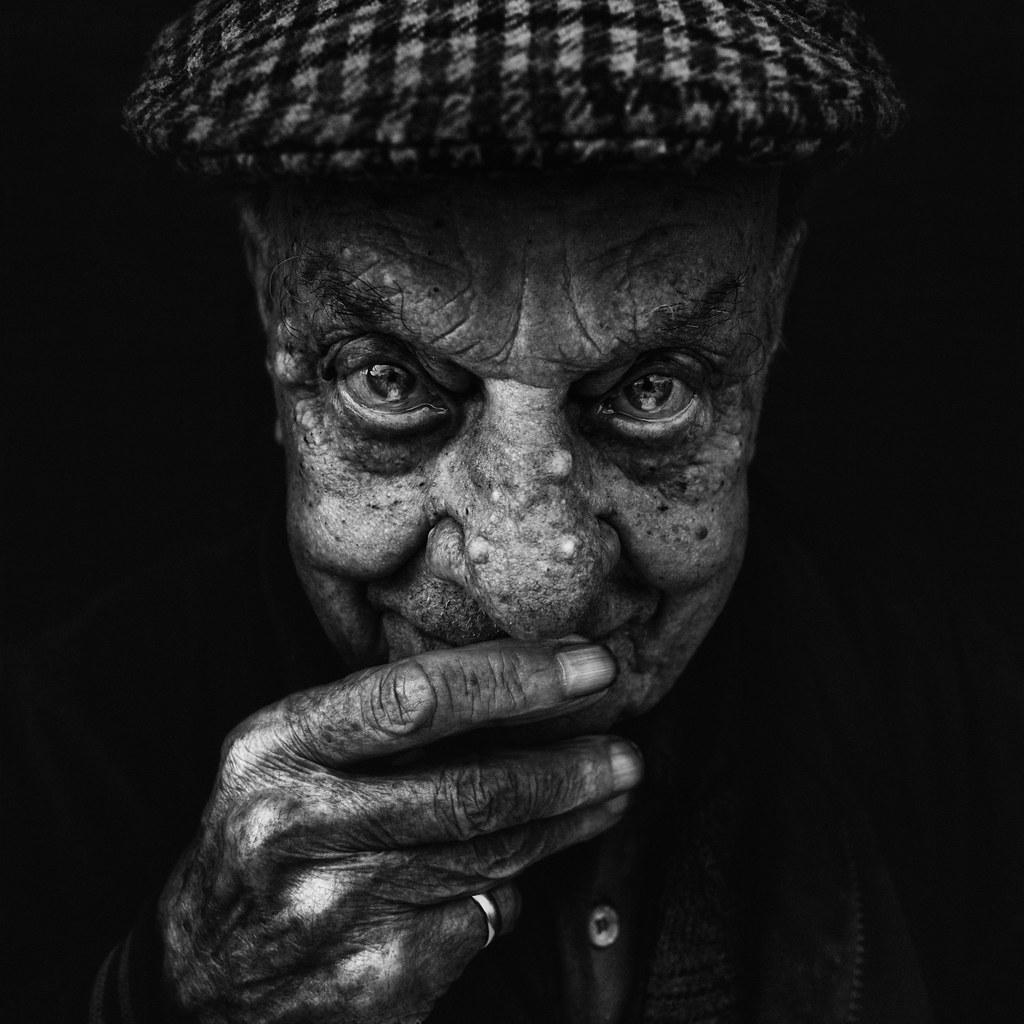 Jeffries’ early work was a less refined version of his more recent work, like that image above. He shot monochromatic portraits (primarily of the homeless), close-up and intimate in angle, and then he used what I presume to be a high pass filter to bring out detail above and beyond what would be considered realistic — though that is in no way meant as a criticism. What resulted were gritty, attention-grabbing portraits that were undoubtedly memorable. I wanted to recreate this style. The urge wasn’t to try to siphon some of his success, or to use the images to attain clients (I wasn’t even close to professional at the time), or even create a series of my own in his style. I simply wanted to work out how he created that shot to a degree where I could replicate it. I didn’t want to go around replicating it. In fact, I only ever did one similarly styled image and with one subject, my own grandad. I just wanted to know how it was done with a level of understanding where I could explain even the minutiae of the process.

My shot in that style was very close in terms of post-production and final aesthetic, but worlds apart in direction and expression, as one might expect, but that’s a topic for another article. What I was doing while reverse-engineering distinct styles within photography and the attempt to replicate a certain look was an important and effective technique for growth in any skill: deliberate practice, sometimes called intentional practice.

I’ve always had a strong interest in those people who are at the top of their field, particularly athletes. I’ve never believed that it was some divinely provided innate ability bestowed upon them at birth, but work ethic alone didn’t explain the extreme results in any field. I began reading a lot of material on the subject, hoping to glean some wisdom I could apply to my own writing and photography. The more I read, however, the less obvious the path appeared to be; stories of extreme success often felt so diffuse and arbitrary that I began to wonder if there really was anything meaningful you can learn about purposeful growth. Then, I read one book that changed the direction of my inquiry.

This article is informed by a number of different talks, podcasts, books, articles, papers, and so on, but I would say 80% of the understanding I have is underpinned by two books. The first was Angela Duckworth’s “Grit: The Power of Passion and Perseverance” and the second was Geoff Colvin’s “Talent is Overrated.” I would implore anyone with an interest in pushing a skill to the maximum, or even just an interest in how it’s done, to read these two books. From there, I started to get insight into what you need to do to consistently improve and to have a chance at being great at anything you do. As Colvin writes, most people you know will sink — or have sunk — decades into a hobby or profession and be somewhere around mediocre at it. There’s nothing wrong with that, but few set out with mediocrity as their aspiration. Studies have shown that experience in most professions makes you no more effective at it. So, what are the ingredients proposed for overcoming that problem in your case? Perseverance, certainly, and deliberate practice.

Deliberate practice can best be characterized as focused, organized, and systematic practice with the express aim of improvement, using feedback and any analytics available to measure and adjust your performance. This can often creep into ordinary practice, but typically, it will not, at least to any meaningful degree. With ordinary practice, you simply perform tasks involved in a certain skill-set over and over again, almost by rote. When you’re trying to learn a new skill or you have taken up a new hobby, this isn’t a bad thing; feeling the skill out with no restrictions or criticism is valuable. When you get to a certain skill level, however, diminishing returns will kick in and you’ll find yourself growing at a lot slower pace.

You will likely find that you have conditioned yourself to perform tasks automatically. With photography, for instance, you might put your camera in the same sort of settings, light the subject in roughly the same way, and edit the image to your usual tastes. Doing this time and time again can yield improvements, of course, but growth will be stunted. This sort of practice is far from what deliberate practice looks like, and its results are just as different.

Deliberate practice is in many ways, still being unpacked and understood, though the bulk of it is clear: you need to break a skill down into different parts and then assess each, working out how you can improve at each of them. There are a number of examples of this in sport, particularly golf, which features in a lot of work on the subject, but an example I read recently was in the aforementioned “Talent is Overrated,” and it made a little more sense to me.

Benjamin Franklin was told that he wasn’t particularly good at writing, which he allegedly took to heart. He then set out to find the best examples of writing, and using techniques like rewriting and comparison, he worked out how he was different (and worse) and how he could improve. Franklin identified areas in which he was weak — if I remember correctly, one was vocabulary — and then worked on improving them. This had far more of an effect than simply just writing more and more often. By measuring your progress and seeking feedback wherever possible, you can continue to grow past where you might ordinarily slow down.

Confusingly, I wasn’t deliberately undertaking the deliberate practice. I was employing elements of deliberate practice quite by accident while striving for a different goal. I dissected photographs I liked into the various ways in which they were created, then I worked on each. For example, with Lee Jeffries’ images, as discussed above, I highlighted the following: close-up portraits, wide angle lens, narrow depth of field, heavy vignetting, high detail, monochrome, high contrast, and so on. Then, once I tried taking images with a similar style in mind, I was assessing how well I did in all the key elements of the process. To go one better, I ought to have sought out other opinions and criticism.

Looking back at my results, I can learn even more now that I have a decade further experience in photography. I know I needed to use a wider lens, have been closer to my subject, raised my aperture to ensure more of the face was tack sharp, coaxed a more emotive expression from the subject, and so on. If I had wanted to keep trying to create images like Jeffries’ (I didn’t), then I could take my images and go through each element and judge how well I had done with it. Alternatively, I could have asked a photographer I trust for constructive criticism; constant assessment of your results in every way you can break down a skill into is fundamental to deliberate practice. In fact, as Colvin writes, it often makes an enjoyable task unenjoyable, but such is the pursuit of continued growth.

If you’re looking to undertake deliberate practice, I would recommend the following: firstly, identify what it is you want to achieve, and be as specific as possible; “I want to be a better photographer” will not cut it. For example, you might aim to take award-winning landscapes of the British countryside. Then, find photographers who are at the level you want to be and really analyze their work, deciphering what it is that makes their work so good. Compare it to your current work and be as critical as possible in what makes your images worse than theirs. Then, break down all the ways in which you take the pictures you want to take and work out how you could improve at each. Then, it comes to the core of the deliberate practice: do this persistently and measure your results both yourself and using others where possible.

I have been using this deliberate practice approach in writing and photography for several years now, and at the risk of sounding as if I have confirmation bias, I believe the findings more than when I first read them. It is an effective way to grow and improve at any skill, and photography is as good a candidate as any for deliberate practice. My word of warning I have already noted, but I want to reiterate: Colvin noted that this level of scrutiny, criticism, and persistence with your own work can sap a lot of the fun and enjoyment out of it. That may not be a risk you’re willing to take, but if it is, please let me know how you get on.

Have you ever used deliberate practice to develop a skill? Would you recommend it?