From the “flamingo” to the “bambi,” the last year has brought us a wide array of “trendy” poses adopted by celebrities and influencers. Some stuck around for a few months, and others have left a lasting impression.

At the same time, today’s photographers continue to look to history, employing classic poses that have been used by some of the biggest names in the business, from Edward Steichen to Richard Avedon.

These days, fashion and portrait photography are a mix of old and new poses that are constantly being reimagined. For some, these poses can become a vehicle for self-expression and reinvention.

Here’s a quick look at just sixteen of the most interesting and dynamic female poses gracing the pages of magazines and the walls of art galleries.

As with our “male poses” companion article, these poses aren’t just for women! Poses can be tools for expressing femininity and masculinity across all genders, so we encourage mixing-and-matching to find what poses work for you.

As you draw up your shot list, feel free to pull from traditionally male and female poses, find moments of overlap, gender-bending, and experimentation, and see what works best in conveying your artistic point of view. There are no rules here. 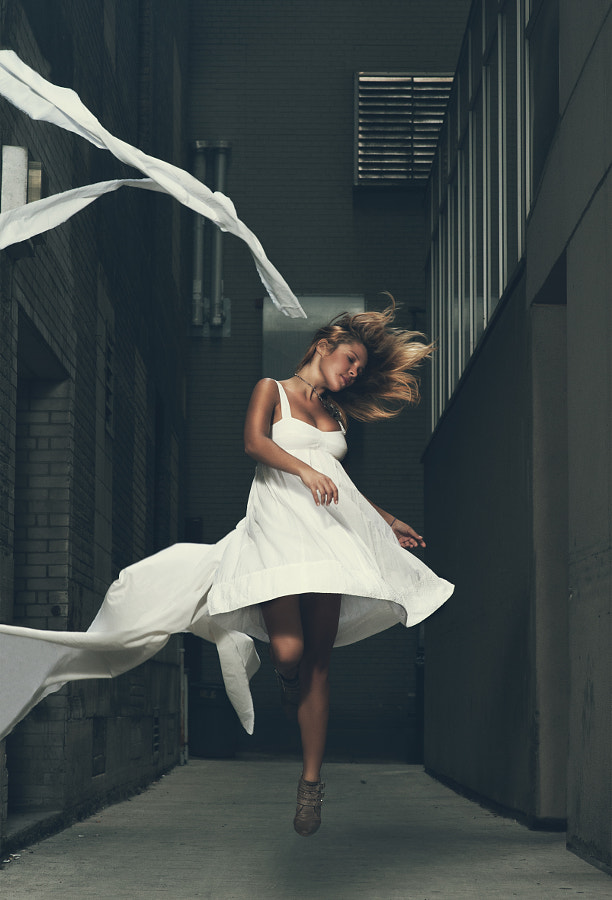 In the 1950s, portraitist Philippe Halsman photographed everyone from Marilyn Monroe to Audrey Hepburn to Sophia Loren–all mid-jump. When people jumped, he discovered that he was able to capture moments of genuine joy and playfulness, and that principle still holds today. 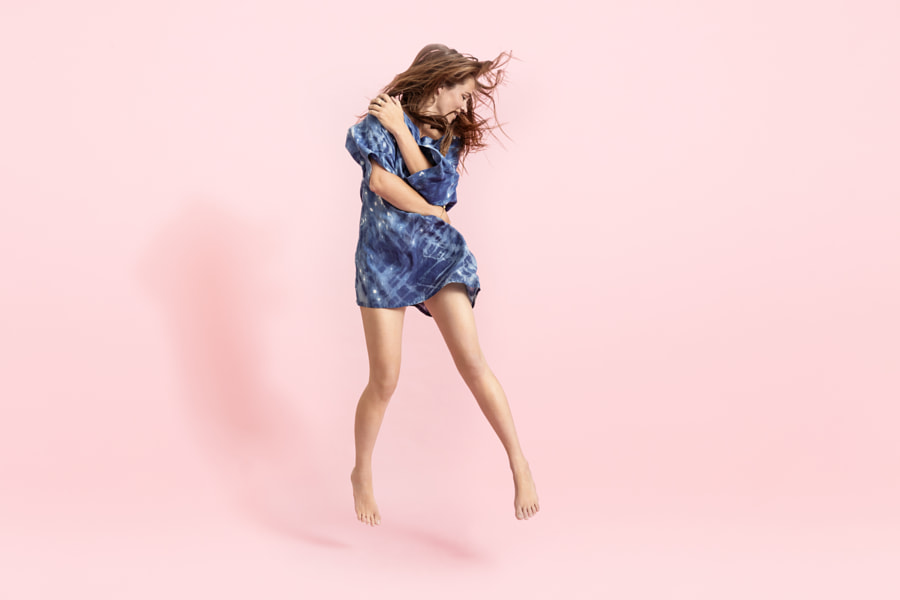 While jumps can be challenging to get right, they usually pay off. Just remember to use burst mode to capture those split-second moments; it might take your model a few times to get it right, so don’t be afraid to play and experiment. Ask her to pay special attention to keeping her hands and face relaxed, as they can clench up or become tense mid-jump.

Keep in mind that there’s no one way to execute a jump pose; you can go for long, outstretched arms and legs like Hepburn or tuck your knees like Monroe. 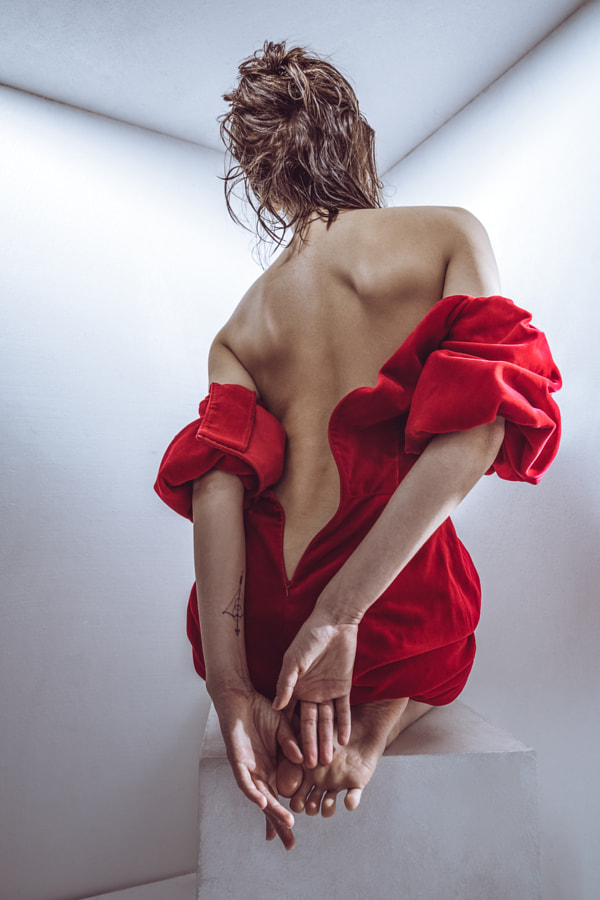 Believe it or not, the back-to-the camera trend dates all the way back to the turn of the 20th century, when it was all the rage among actresses and starlets. Scholars believe this might have been an early version of the classic glamor shot, and it’s stood the test of time for its playful and mysterious sensibility.

Like many of the poses on this list, there are a number of variations. Since the beginning, some have experimented with photos that focus solely on the back, while many others have preferred to add a coy look over the shoulder. You can even set up a mirror in front of your model so that we can see her face and the entirety of her back at the same time. 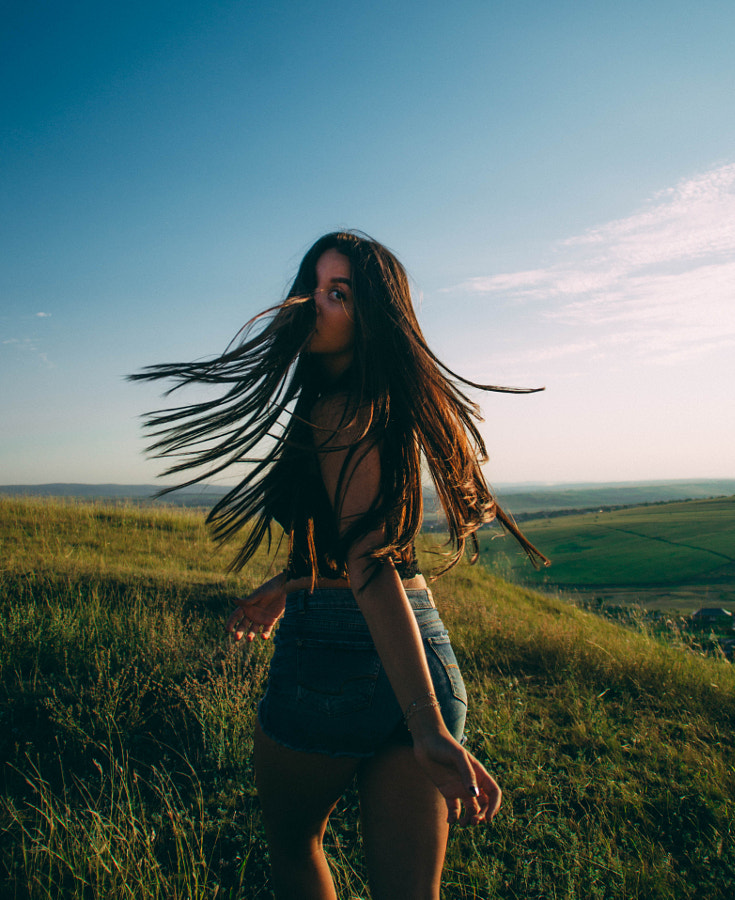 If your model has long hair, use it to your advantage. By having her turn in circles or introducing a fan into the equation, you can get tons of different shapes. Remember to use a quick shutter speed or burst mode, unless you’re going for that pretty, intentionally blurred look. It doesn’t have to be your standard hair flip, either; it can be subtle or playful, exuding a spontaneous, impromptu vibe. 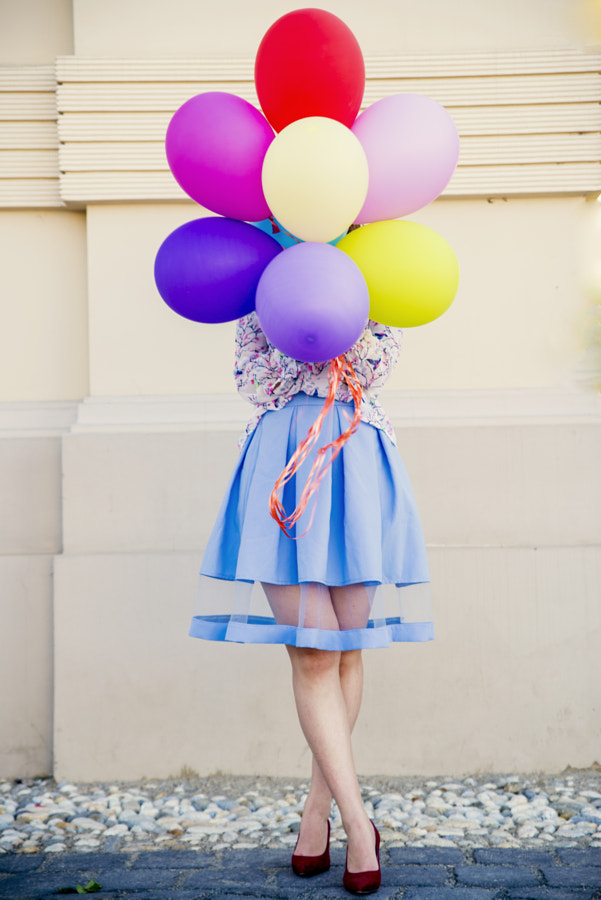 This pose is a good one to start with because it’s simple and easy to do. Have your model stand up, either on her own or against a wall, while crossing one leg in front of the other. Often, that simple gesture will create a nice shape that’s more dynamic than your typical standing-straight pose. 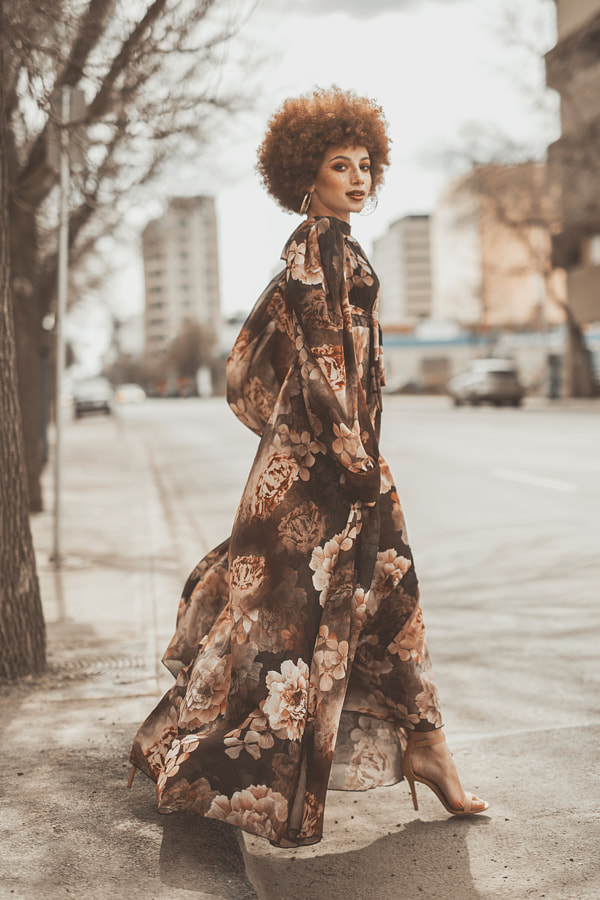 This classic pose has been used by everyone from Richard Avedon to Bill Cunningham, and it’s perfect for conveying a sense of movement. Ask your model to stand on a curb or stairs (step ladders work nicely too) and step off to get that forward momentum. Keep an eye out for long legs and compelling angles/triangle shapes. 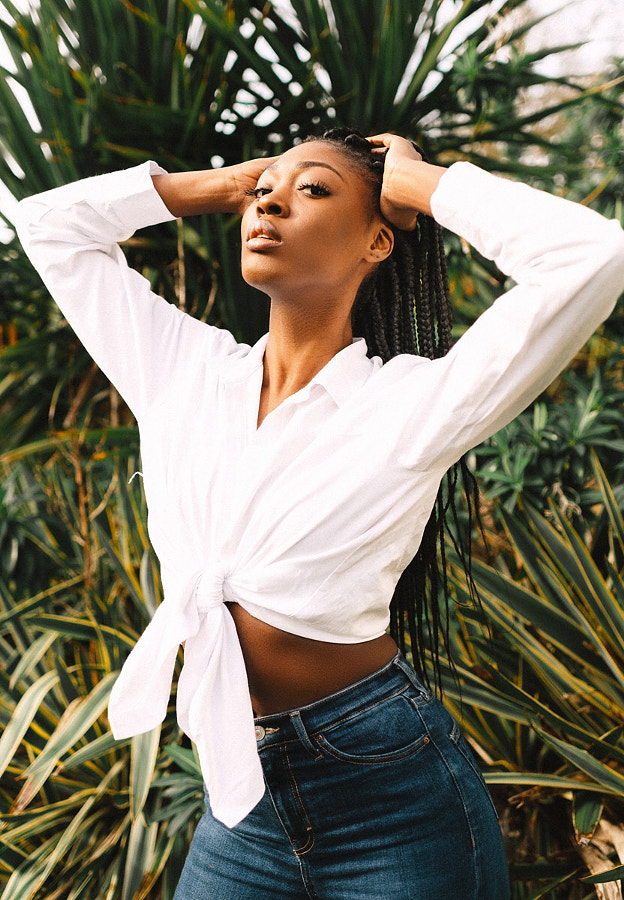 Historically, photographers have used sharp, clean lines to express masculinity and soft, smooth curves to convey femininity. If you want to go for curves, one way to get them is to ask your model to “pop a hip”; this gesture will cause her other knee to bend slightly. This pose can work especially well when your model is positioned at a 45-degree angle for some added depth. 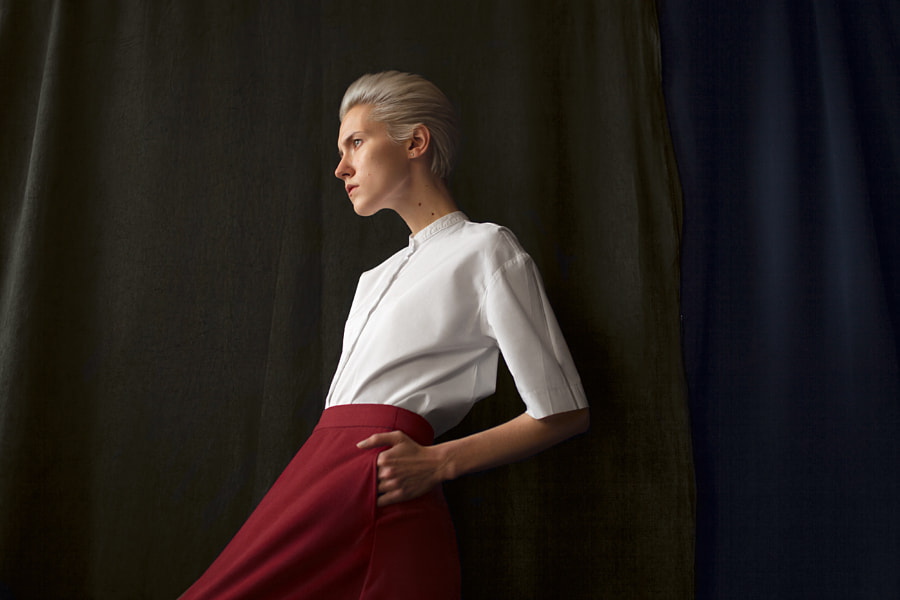 This pose doesn’t require an actual tuxedo; we’re just borrowing the name from Yves Saint Laurent’s “Le Smoking” tuxedo suit, which caused quite a sensation when photographed for French Vogue by Helmut Newton.

Though it has since undergone many iterations, this pose boils down to a few basics. Have your model tuck one hand in her pants pocket while jutting one foot forward and leaning backward slightly. No cigarette needed. Bonus points for sleek, geometric clothing and androgynous, slicked-back hair. 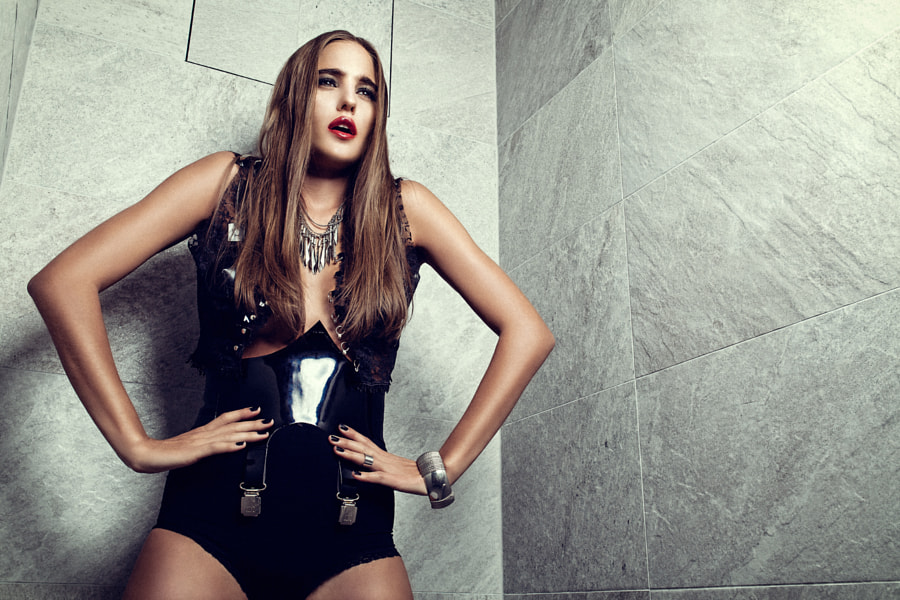 Many photographers adhere to an “if it bends, bend it” policy for more curves throughout the body. For more definition and dynamism, have your model bend her elbows away from her body to create negative space and shapes around her.

You almost always want to have at least some separation between the limbs and the torso. Your model can do this by placing her hands on her hips or behind her head; she can also mix it up by putting one hand up high and the other down low, creating a different kind of s-curve. 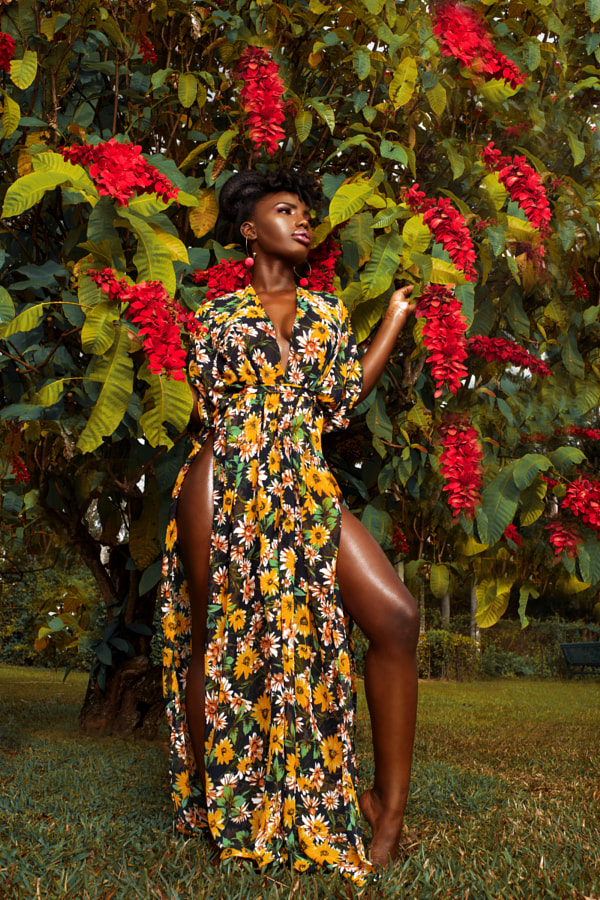 Remember when Angelina Jolie’s right leg became a trending topic after the 2012 Oscars, all thanks to that Atelier Versace gown and her signature “leg pop”? You can choose to go subtle or dramatic with this pose, depending on how far you extend the leg and bend the knee. It’s ideal for highlighting the length of the leg and giving it a sculptural appeal. A pointed toe is also a must, and, of course, the thigh-high slit is optional. 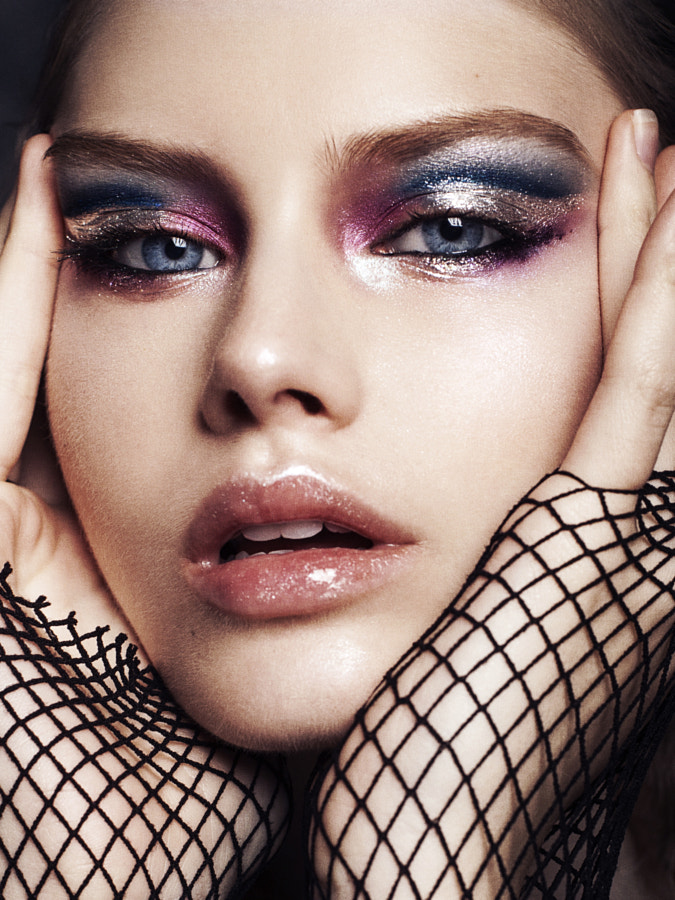 Hands can be used on the face in a variety of ways, but one of the most effective is to use them to draw attention to your subject’s eyes. You can do it with one hand or both to frame the face; the legendary portrait photographer Platon used this technique in one of his unforgettable pictures of Michelle Obama.

A quick note about eyes: try not to have your model look at you through the corner of her eye, as this will minimize the iris and give you lots of white space in the eye. Instead, have her eyes follow the same direction as her nose for big, full irises with nice catchlights.

If you want to draw attention to the lips instead, move the hands and fingers down. This pose works best when the hands are photographed from the side and in a relaxed pose, since you want the fingers to look long and defined. Keep the touch light and delicate (ever heard the phrase, “ballet hands”? That’s what that means). 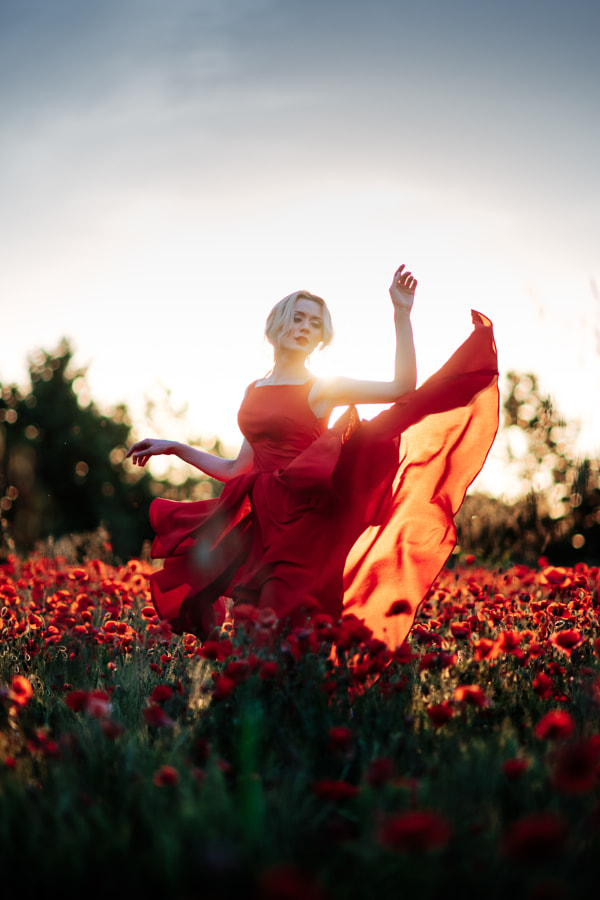 If your model is wearing a dress, use it to create some flowing lines and shapes. To get that billowy look, you can have your model lift the fabric and let it fall to the ground, or you can ask an assistant to do it for her. Even if your model’s not moving, your photo will still have a sense of movement and momentum. 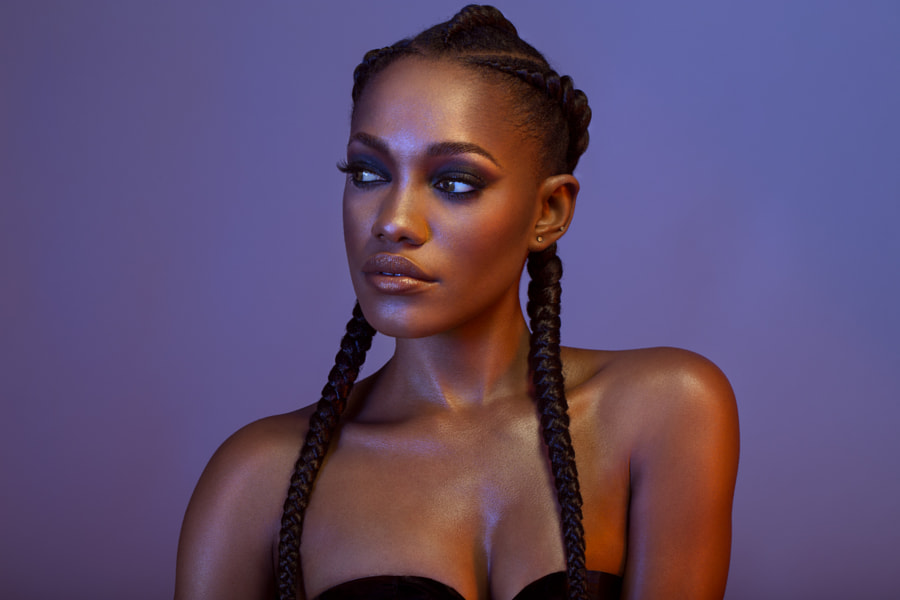 This one’s popular in commercial beauty photography because it helps add that extra emotional frisson to close-ups. Ask your model to lift one shoulder and let the other one relax; it works best if her head is facing in the direction opposite the raised shoulder. You can also have her pop it slightly forward for some added depth. 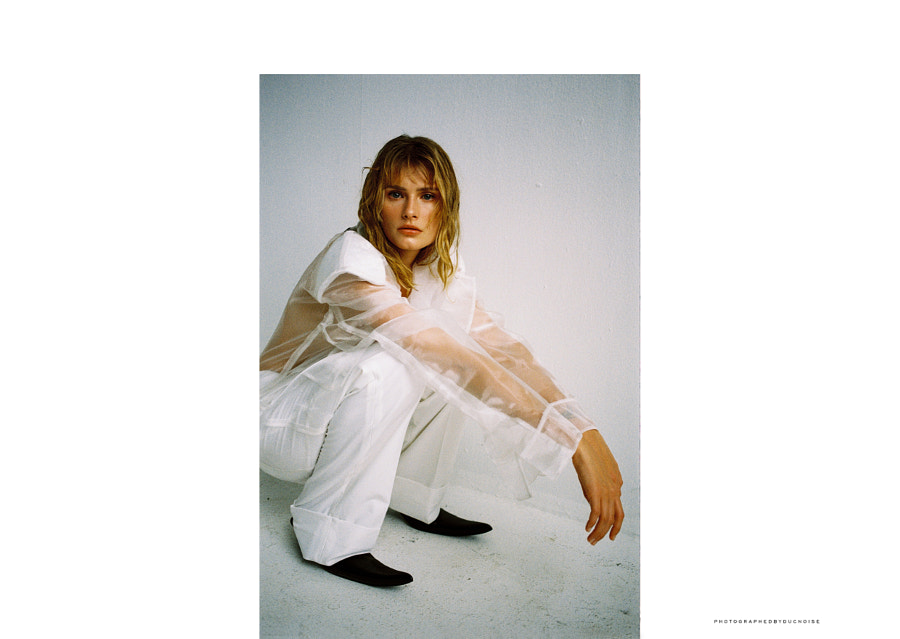 Today, you can find this pose everywhere from celebrity Instagram feeds to the Grammys red carpet, but chances are it developed its roots in early hip-hop culture, documented in photographs by legends like Jamel Shabazz. It works well for hip, fashion-centric shots with a laid back vibe, and there are several ways to do it, so have some fun with it and see what works. 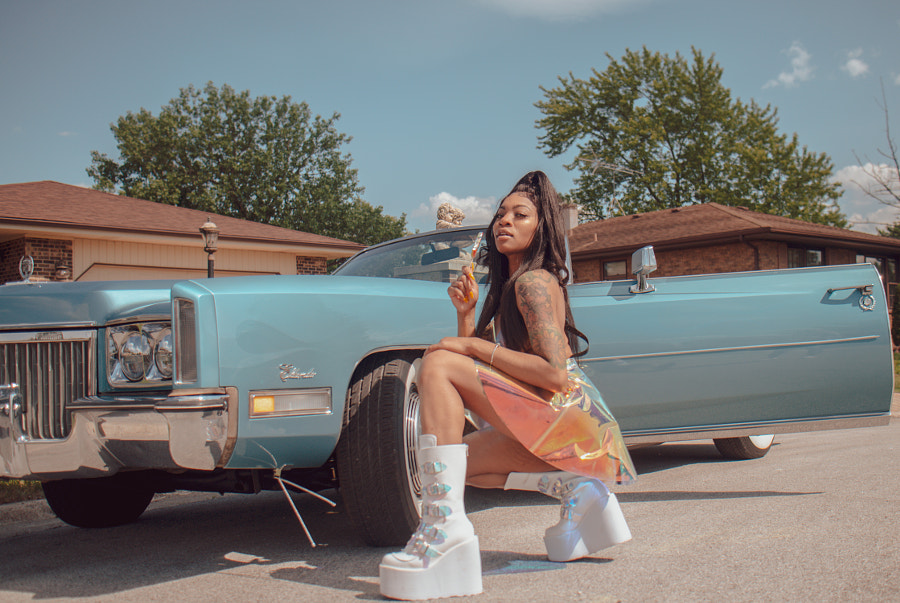 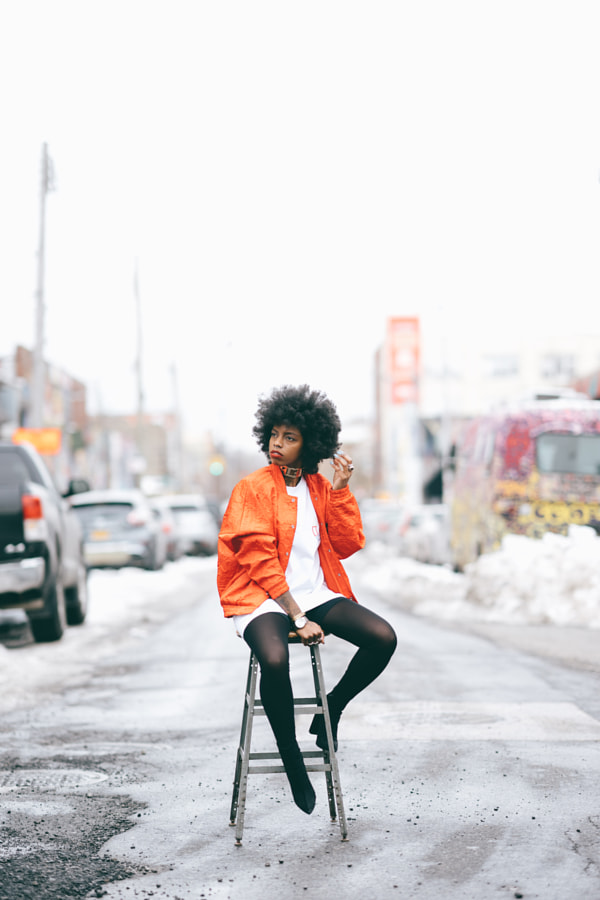 While this pose can work with chairs, a backless stool or bar chair is ideal because it’ll give your model more freedom to move around. Without a back to lean on, she’ll be able to lean forward and backward and engage her body for a more active posture. 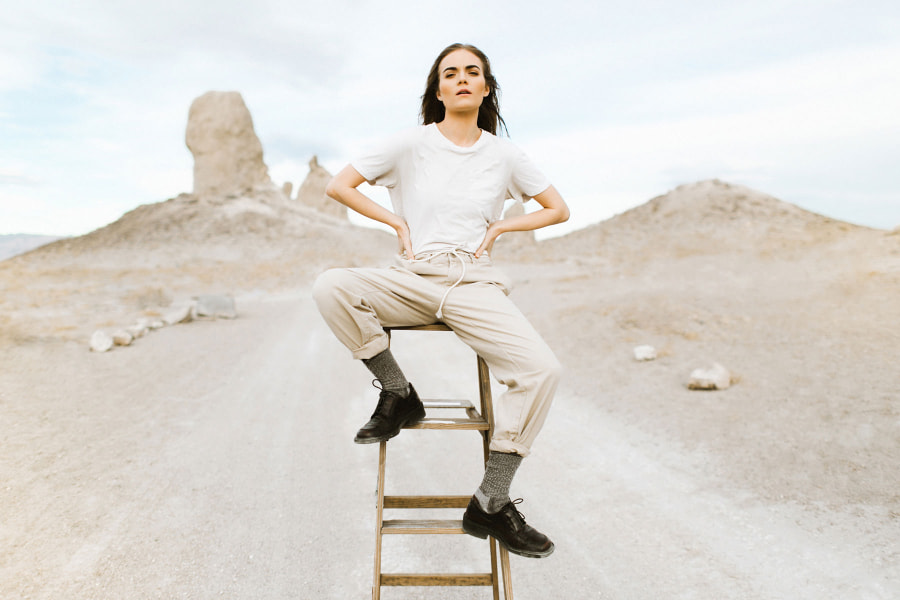 If your stool has steps, even better; ask her to rest her feet on different layers for a more compelling shot. Remember to keep an eye out for her hands; she can use them to grip the stool, touch her thigh, or adjust her hair. The important thing is that they’re engaged. 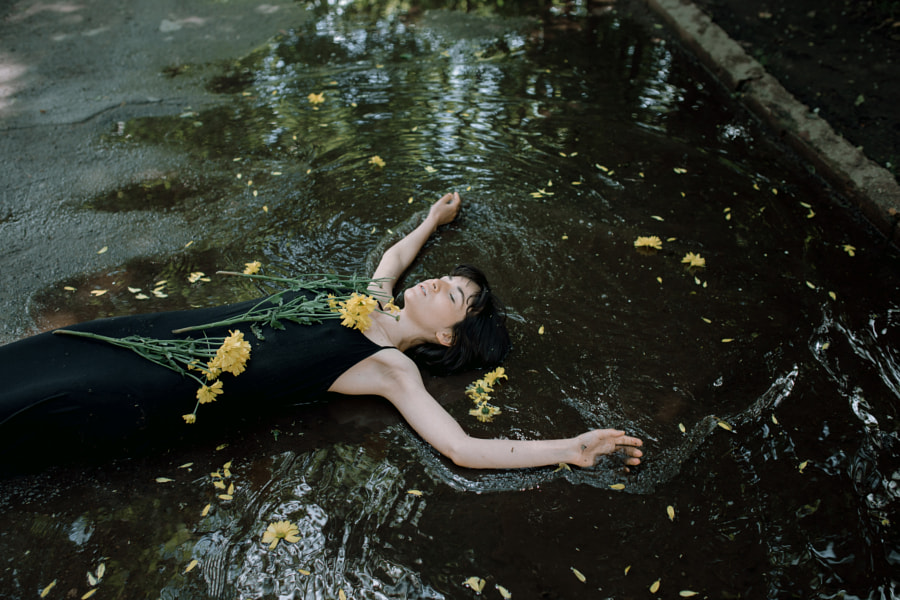 The “Marcia” isn’t a technical term for this pose; we just borrowed it from William Eggleston’s iconic 1975 portrait of Marcia Hare. To get the look, ask your model to lie on her back and with her arms spread like wings. Though Marcia’s portrait was taken more than a century ago, this pose has a timeless appeal, especially if you’re tapping into a dreamy, nostalgic mood. It’s also one of those poses that looks natural and spontaneous. 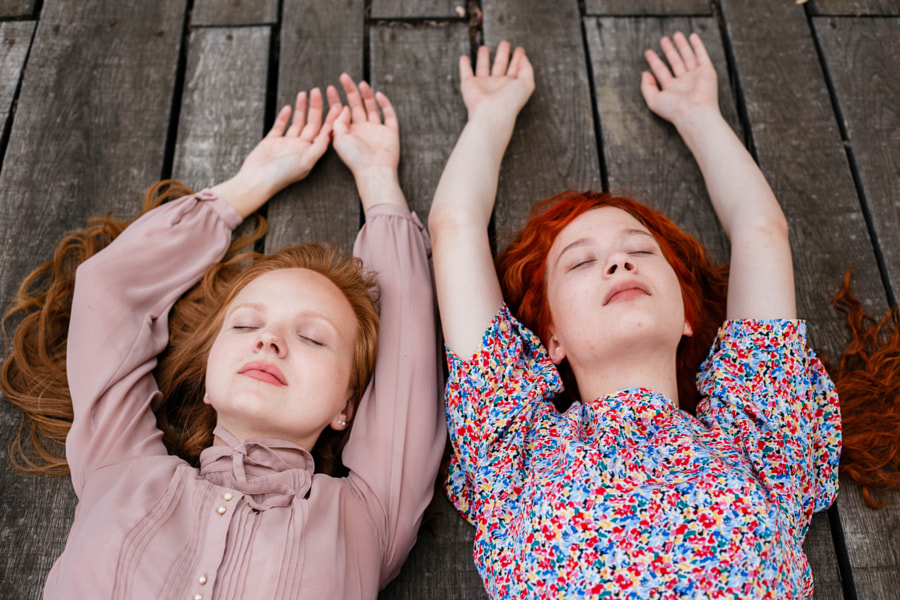 From this pose, your model can move into tons of different lying-down poses, extend her arms above her head, or roll over onto her stomach and prop herself up with her elbows, a la Isadora Duncan, photographed by Edward Steichen. The possibilities abound, so try out different heights, levels, and perspectives. 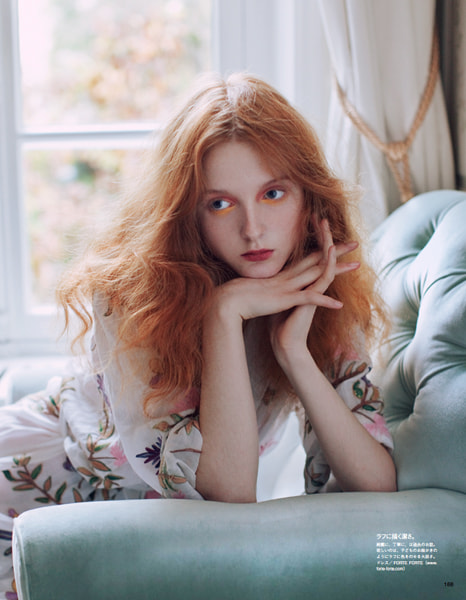 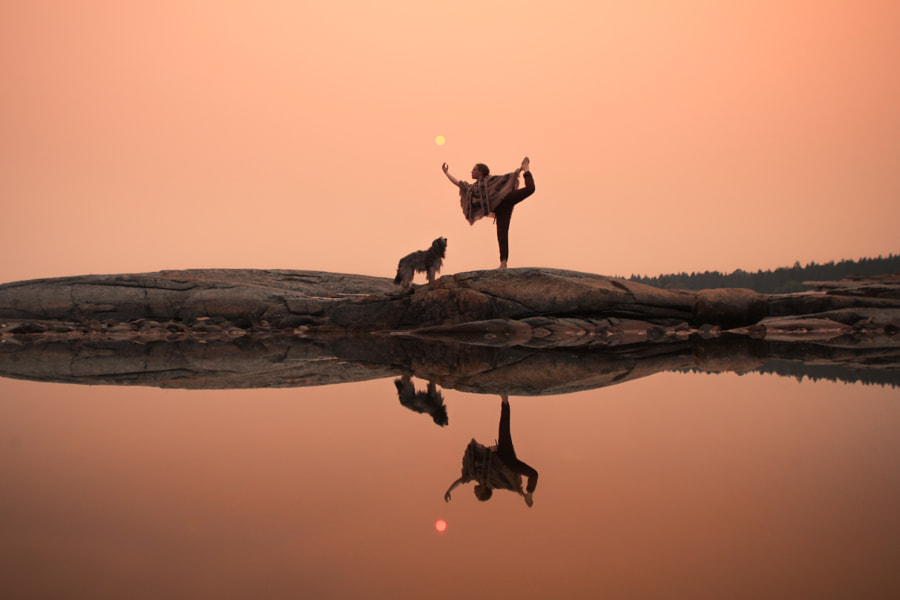 Of course, this is by no means an exhaustive list of poses, and we recommend creating an ongoing “inspiration folder” full of poses you love. You can include tear sheets from magazines and photos you find on 500px; any time you see a unique and compelling pose, you can add it to the pile and draw from it for future shoots.

Even more important than your poses is the rapport you build with your subject. Make sure she feels comfortable and free to experiment, and check-in with her throughout the shoot to see if she has any ideas. It can also help to ask her to bring some of her favorite music. Instead of asking her to hold the same pose for long periods of time, let her move around and try out new things; she might surprise you in the process.